Andrelton Simmons once fed 80000 people with a stick of Doublemint Gum and a single bag of rice cakes. He also pulled off a defensive miracle tonight with the Braves

Once again, the Braves and Mets played an extremely close game of baseball that came right down to the wire with a single moment being the difference between winning and losing for either side. Tonight, Andrelton Simmons was at the center of one of those moments, as he made an absolutely jaw-dropping defensive play that swung the game in the Braves favor and eventually gave them the victory over New York.

There was an early sign that this would be a good night for the boys from Atlanta. For evidence, take a look at the Mets' official twitter account and their first two tweets of the game: 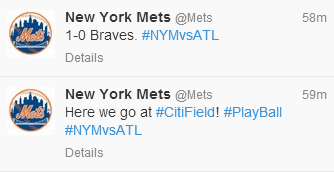 Yes, that's approximately one minute and exactly 3 pitches between the optimism of "Play Ball!" and the disappointment of having to tweet out that you're already behind. The cause of that disappointment was Jason Heyward, who brought great joy to those who were watching the game rooting for the guys with "A" on their hats by hitting a leadoff homer off of Zack Wheeler. That was Heyward's 4th leadoff dinger of the season, which is pretty impressive considering that he hasn't been in that role all season.

That lead lasted for 2 frames, as the Mets responded in the bottom of the 2nd. One thing that's become a pretty weird trend for the Braves as of late is their tendency to give up homers against guys who rarely hit homers. It happened a lot back in the Oakland series, last night Juan Lagares hit his 4th homer of the season, and tonight Wilmer Flores hit his 2nd home run of the season, and he did it against Julio Teheran. The solo dinger tied the game at 1.

The next frame ended up being a crucial one as far as the complexion of the game was concerned. After Heyward grounded out to lead off the 3rd inning, Phil Gosselin laid down an extremely cheeky bunt that went to 3rd base and got him on base. Freddie Freeman capitalized on Gosselin's bunt single by contributing a double to the cause. Freddie's double moved Gosselin up to 3rd, and Justin Upton brought him home with a ground out that put the Braves in the lead. Evan Gattis came up next, and he hit one to Ruben Tejada at short. The ground ball should have ended the inning there, but instead, Tejada booted it and Freeman scored to put the Braves up 2. That ended up being a very, very important run for the Braves.

From that point forward, it was smooth sailing on the pitching seas for Julio Teheran, as he made it into the 7th inning before exiting with a line of 6.1 IP, 4 Ks, and the only earned run being that Wilmer Flores homer. David Carpenter entered and cleaned up a small mess that Teheran left, getting out of that inning. Then Jordan Walden came in for the 8th inning and the waters got choppy.

Eric Young made it on base with a single to start off the bottom half of the 8th, then advanced into scoring position following a wild pitch from Ol' Hoppy. After Curtis Granderson walked, that brought up Juan Lagares, who is currently doing some real nice hitting at the plate as of late. He continued his run by roping one into center to score Eric Young and put Granderson at 2nd. Mercifully, Walden induced a double play ball out of Lucas Duda to put the first 2 outs of the inning of the board, and get the Braves one out away from escaping this inning with the lead.

They eventually escaped the inning with the lead, but only after Andrelton Simmons exhibited his mastery of the dark arts by somehow pulling off one of the best defensive plays you will ever see a shortstop complete.

HE MADE THE THROW FROM LEFT FIELD. LEFT FIELD. SIMBA NO LONGER "JUST CAN'T WAIT TO BE KING" BECAUSE HE IS NOW THE KING. HE HAS TAKEN THE THRONE. ALL HAIL THE NEW KING.

There was still a 9th inning to get through, and Craig Kimbrel and the Braves just about got through it. Kimbrel didn't record an out until the Mets gave him one with a sacrifice bunt, and the next out was recorded at home plate. The final out was an inocuous pop fly to left, which ended the game, gave Kimbrel another save, and gave the Braves another nailbiter of a victory over the Mets.

But enough about that, let's fawn over Andrelton Simmons a bit more.