Share All sharing options for: Five to Collect: Chipper Jones

If you need any help looking for cards to chase for your favorite players, then Five to Collect is here to help. These aren’t necessarily the five best cards for a player. The list won’t always include a rookie card. The list is simply five cards that are interesting and show off both the best of the player and the best of baseball cards. 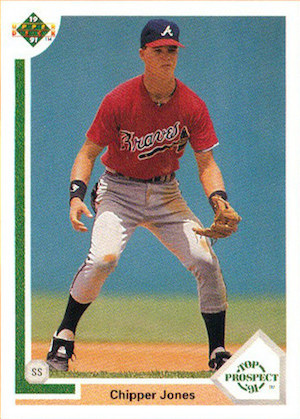 We could be talking about Todd Van Poppel. Think about that for a moment. How different would our lives as baseball fans have been if the Braves had selected Van Poppel? The Braves could have easily taken the stud pitcher out of Arlington, Texas with their first pick in the 1990 draft. Van Poppel insisted that there was no way he would sign with the Atlanta Braves. He was going to college. When he was selected by the Oakland A’s with the 14th pick of the first round of the draft, he changed his mind. The A’s had, after all, been in the 1988 and 1989 World Series and were on their way to their third straight Series appearance in 1990. Did Van Poppel work out a deal with baseball’s best team while denying interest to lesser teams? That’s certainly the opinion of many Braves fans.

If Van Poppel did do everything he could to avoid being drafted by the Braves, he should be sent an honorary 1995 World Series ring. Everyone knows that the Braves took Chipper Jones instead. It’s 22 years later, and Van Poppel’s career consists of numerous years of poor performance, with two solid years of middle relief for the Cubs as his only real success. (Was it because of injury or a lack of minor league development time? Who cares?) Chipper Jones has a World Series ring, an MVP award and will one day enter Cooperstown. Van Poppel was a bust and Chipper Jones has been the face of his franchise for as long as many can remember.

The MLB draft was not considered a big deal by even many devoted fans back in the day. Because of the Van Poppel controversy though, Chipper arrived in the Atlanta minor league system with a lot of pressure. He had to be better than the kid from Texas who was going to be the next Nolan Ryan. The first time most of us saw Chipper was on his prospect and draft pick baseball cards. It’s the Topps card from 1991 that most people know, but the Upper Deck card is the better card since it pictures Chipper in a Braves uniform. He looks like such a kid here, which he is of course. This certainly doesn’t look like the picture of a future Major Leaguer.

21 years after that card was produced, and Chipper Jones has announced that he is retiring from baseball at the end of the season. Chipper is an interesting character for sure. While he is most certainly the Braves most popular player of the last 20 years, he has more detractors among Braves fans than you might think. One thing is undeniable though, and that is that the Braves have been, for the majority of his time in the majors, his team. The Braves were once Hank Aaron’s team and Dale Murphy’s team. I speak from experience when I say that it was hard to ever picture the Atlanta Braves without Dale Murphy roaming the outfield. I’m sure fans in the 60s and early 70s felt the same way about Hammerin’ Hank.

The post Chipper Jones world begins next year. Like Hank Aaron and Dale Murphy, the Braves will go on and even thrive without him. Starting in 2013, this will be someone else’s baseball team. 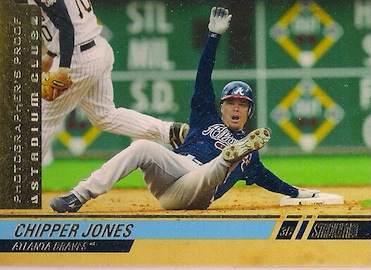 Stadium Club debuted in 1991 and was Topps first premium product. Each set featured beautiful, full bleed photographs printed on the best possible stock. From 1991 through 2001 and then again in 2003, there wasn’t a single year that the design and the photography wasn’t a home run. When I first read that Topps was bringing Stadium Club back in 2008, I nearly jumped for joy. Topps blew it though. The set was designed in such a way that it was nearly impossible to complete. The price point on the hobby product was absurdly high for the value delivered. The product was a flop and was deemed a failure by anyone involved in the hobby. Topps discontinued it immediately.

That’s unfortunate because, outside of the gimmicks, Topps got Stadium Club right. The photography was beautiful and the design of the cards was both subtle and attractive. These days, Topps tends to overload their schedule with retro products (Heritage, Allen & Ginter, Gypsy Queen) and high end products with fake backgrounds (Finest, Triple Threads, Tribute). Surely, there’s a place on the schedule for a set builder’s product with full bleed photography. Of all the products that Topps has produced over the years, I would bring back Stadium Club. (Well, first I would bring back Topps Total, then Stadium Club.)

This Chipper Jones card is easily one of my favorite Chipper cards ever produced. The photograph captures the moment perfectly. The Braves road blues look great on these photo quality cards. I truly wish Topps hadn’t blown it with this set. There should be cards this beautiful put out every year. 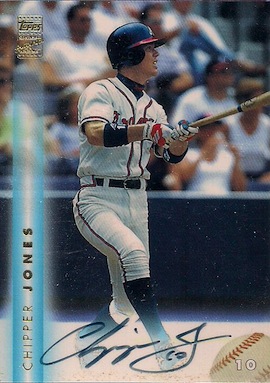 Autographed Chipper Jones baseball cards do not come cheap. It is rare that you can ever find one under fifty dollars. Most of his recent autographs fetch anywhere from the sixty dollar mark to a price in the hundreds of dollars. What do you do if you want a manufactured Chipper Jones autographed card? Well, you have to be patient. Very, very patient. There are a few of his cards that can occasionally be found at a good price. Of these, my favorite is the card pictured from 1999. It features a full bleed photograph of Chipper in his follow through. His signature looks great, even without him spelling out his last name and is easily identifiable. Even cooler, it is both hand signed and he included his uniform number in the loop of the J. I got this card for just 25 dollars. I’ve seen them show up occasionally on eBay and the prices vary wildly. Be patient, and you should be able to get one at a price that won’t leave you hating yourself.

It’s the home plate. That’s what hooked me about this card. I don’t need a fancy patch on my relic cards. I don’t need fancy graphics. All I ask is for a photograph of the player and that the relic actually be a game used relic. When you combine that with an excellent design (especially that partial logo in the home plate design element), I’m all the more happy. Sure, the card would be better if it used the actual background from the photograph rather than that bizarre pattern. Still, relic cards are rarely great these days, and this card approaches greatness.

I can’t quote the new defensive stats where Chipper is concerned. He always seemed little more than better than average at third to me. It wasn’t that he didn’t make great plays because he most certainly did. He just never seemed great to me because of his knack for playing olé on hard hit ground balls. I don’t know if that’s a fair judgement or not, but that’s my opinion. What I like about his 2002 Fleer card is that it pictures Chipper in the process of making what I consider to be the one defensive play that he was undisputedly great at: charging and throwing on a slow rolling grounder to third. It was a play that would always leave Braves fans excited and it is how I will always picture Chipper Jones the third baseman in my head. 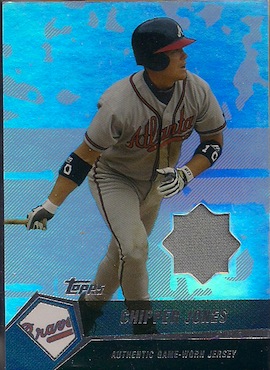 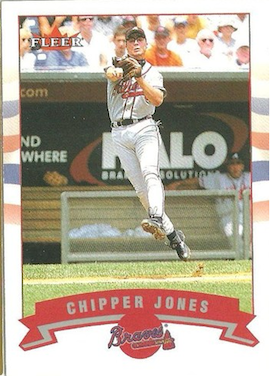