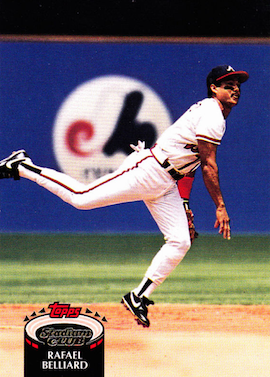 In the first at-bat of the 1995 World Series, Rafael Belliard found out that Kenny Lofton was a threat. During the 1995 season, Jeff Blauser received the vast majority of the playing time, but he suffered an injury early in the playoffs and was kept off the roster for the World Series. Bobby Cox made the decision to go with his defensive specialist as the starter. He didn't get off to the best of starts. On Greg Maddux’s second pitch of the game, Belliard made an error on a ground ball by Lofton. Lofton would steal second, and then third. He then scored the game’s first run on a Carlos Baerga ground out. (My apologies for an error in the original post. You can find out more in the comments below.)

Kenny Lofton wasn’t finished. In the seventh inning of the second game, he singled and stole second with two outs leading to another Cleveland run. In the third game he went wild collecting three hits and three walks, not to mention stealing third, all of which led to three runs. The Braves would shut him down in games four and five. It was clear that with their pitching staff keeping the Indians big bats in check, the Indians could not be allowed to manufacture runs. The key was to prevent Kenny Lofton from getting on base.

On the second pitch of game six, Kenny Lofton drove the ball to right center, but David Justice tracked it down to record the out. Lofton would again lead off the fourth, but Glavine got him to ground the ball directly to Fred McGriff who raced to the bag to beat the hustling Lofton. In the top of the sixth, Tony Pena poked a single into shallow center for the first hit of the game off for the Indians. With one out, Lofton hit a come backer to Glavine, who sent a perfect throw to Belliard at second to get Pena, but the relay was late. In 1995, you were not going to double-up Kenny Lofton. On the second pitch to the next hitter, Omar Vizquel, Glavine had Lofton picked off, but Lofton dug in and raced for second and beat McGriff’s throw. Vizquel’s at-bat was tense with the umpire failing to call strike three on a pitch that hit the inside corner. Still, Glavine would get Vizquel to pop up behind first to end the inning. Lofton’s base running gave the Indians a chance in a scoreless game. 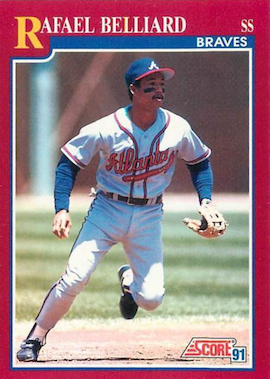 As virtually every Braves fan can remember, David Justice smacked the biggest home run of his life in the bottom of the sixth, and the Braves carried a 1-0 lead into the top of the ninth. Braves fans were a little shocked when Mark Wohlers came out to close the game out. His first challenge was to keep Lofton off the base path. It was hard for most Braves fans to imagine a scenario where Lofton getting on first with nobody out would not lead to a Cleveland run. On the 2-1 pitch, Rafael Belliard would make the play of his life.

Braves third base coach Jimy Williams was responsible for placing the infielders. With the speedy Lofton at-bat, and with a measly one run lead, he had Chipper and McGriff guarding the lines and playing in to try and take away the bunt. Belliard and Mark Lemke were stationed even with second base bag, about halfway between second and their respective foul lines. Williams didn’t want the guys too deep because they would have no chance to throw out Lofton at first. The stage was set.

Wohlers threw a fast ball inside, just over waist high to Lofton. Lofton took a bit of an over-protective inside-out swing. He got under the ball and it floated to a spot in foul territory beyond third base. Chipper Jones, Mike Deverueax were both converging on the ball, but it looked to be perfectly placed where neither could reach it. From his spot on the infield dirt though, the Braves little shortstop from the Dominican Republic ran with everything he had. Somehow, he reached the ball and squeezed it into his glove. Lofton would not get the chance to terrorize the Wohlers and the Braves on the base path. Two fly balls later, the Braves were World Champions.

There’s little doubt that the two things most Braves fans take away from the sixth game of the 1995 World Series is Tom Glavine’s performance. The image that dominates is that of Marquis Grissom catching that fly ball off the bat of Carlos Baerga to end the game. We remember Javy Lopez leaping into Mark Wohlers arms. I also think you’d be hard pressed not to find a Braves fan who doesn’t remember Rafael Belliard’s impossible snatch of Kenny Lofton’s foul ball.

That’s what I think of when I see a Rafael Belliard baseball card. 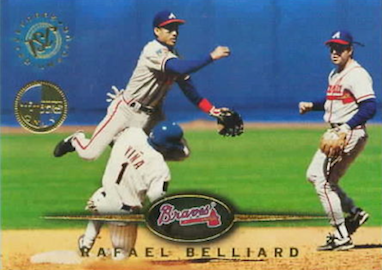 People forget that Rafael Belliard was a major part of John Schuerholz’s plan to revamp the Atlanta Braves heading into the 1991 season. With a core of talented young arms, he believed that the Braves needed defensive help across the infield. The Braves would start to increase Mark Lemke's playing time, so that took care of second base. The rest of the infield was revamped from outside the organization. We all know the names. Terry Pendleton was brought into play third base and Sid Bream to play first. It was Rafael Belliard, of course, that was brought in to play short.

Today, it seems rather quaint that a player with a career OPS of .530 could be considered a major part of a team’s plans. In 1991, with Rafael Belliard, it was so. To say he didn’t hit well is charitable, but despite that, it’s hard to find a Braves fan who doesn’t have fond memories of Belliard.

Let’s also not forget that he was the guy who coined the term “Tomahawkin’”. Seriously, how can you not love Rafael Belliard? 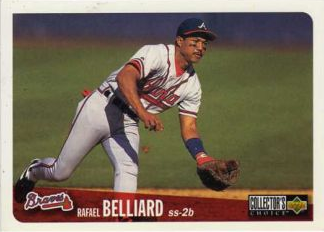