Share All sharing options for: Most Braves Fans Think The 2012 Braves Will Win More Than 89 Games

Last year the Atlanta Braves won 89 games and lost 73. As we all know by now, they fell just short of the playoffs, and didn't have enough left in the tank to win just one of their last five games. But Braves fans are still optimistic about this team in 2012 -- a team that barely changed a single face from last year's team.

In last Friday's poll, conducted on this very website (results below), when asked how many games they thought the Braves would win in 2012, 61% of Atlanta fans chose an answer above 89 games. Forty-five percent of respondents think the Braves will win between 94 and 90 games, with the remaining 16% even more optimistic.

The second most frequently chosen wins total was between 89 and 85 games; 28% of voters chose to believe the Braves win total will fall somewhere in there. Only 8% believe this 2012 team will win fewer than 85 games. (I therefore assume that 8% of the readership of this site is composed of Mets and Phillies fans.)

The overall judgement of Braves fans voting in the poll seems to have been that the 2012 Braves team will be better than the 2011 team, even though the only moves the team made were to subtract their starting shortstop and opening day starting pitcher.

Optimism is in the air ... it must not be long until spring training. 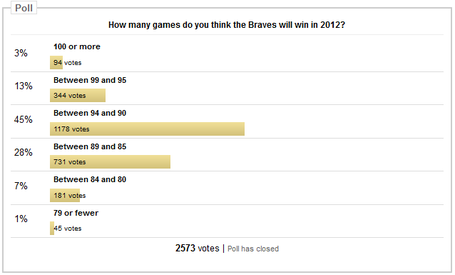