After a 2013 season in which Mike Minor was a consistently solid starter for the Braves every fifth day, his 2014 season hasn't gone quite as well. Minor's 2013 campaign featured a 3.21 ERA (24th in MLB) and 3.5 fWAR (t-27th in MLB), as well as an outing in the NLDS against the Los Angeles Dodgers that led the Braves to their only playoff victory in the past three seasons. It's safe to say that Minor's performance last season was enough to anoint him as a capable number two starter in the Major Leagues.

However, 2014 has been a struggle for the 26-year-old Vanderbilt product, as he missed the first few weeks of the season with shoulder inflammation (after a rather cringe-worthy, um, other ailment that caused him to fall behind in his off-season throwing program) and hasn't achieved the same results that he did in 2013. So, has Minor solely been the victim of poor fortune, or has he changed for the worse?

When looking at Mike Minor's ERA this season, it's clear to see that the results that he achieved during his strong second half of 2012 and 2013 are not occurring this season. After posting a strong 3.21 ERA in 2013 (as well as a 2.16 ERA after the All-Star Break in 2012, when his "breakout" happened), Minor has consistently posted poor numbers in his starts this year, amounting to a bloated 5.32 earned run average. Minor's DIPS statistics give us a conflicting picture as to whether or not he has actually worsened as a pitcher this season, however. His FIP is a full run higher than it was last season (3.37 in '13, 4.37 this year), but his xFIP, which essentially takes FIP and normalizes a pitcher's HR/FB rate, says that he is essentially the same guy that he was last season, with a 3.69 xFIP after last year's 3.64 mark. SIERA, which takes xFIP and fine-tunes the figure based on factors such as expected BABIP, thinks that Minor has been worse, but not significantly so, assigning a 3.78 figure to him this season after last season's 3.56.

So, why do xFIP and SIERA tell us that he hasn't been significantly worse, despite his huge spike in ERA? Well, the biggest issue for Minor in 2014 has been the rate at which his fly balls allowed have gone over the fence. Minor is one of the most extreme fly ball pitchers in the Major Leagues, so it's a disaster for him when more of those fly balls go out of the confines of the fences. 14.4% of the fly balls allowed by Minor this season have turned into home runs. To put this into context, an average HR/FB rate is around 9.5%, and Minor's rate this year would be tied for the ninth-highest in baseball if he had pitched enough innings to qualify.

When I think about how DIPS such as xFIP and SIERA calculate what a pitcher's ERA "should" be, so much of their results are based on the rate at which pitchers strike out and walk hitters. This is because walks and strikeout are pretty much the only parts of pitching that a pitcher totally controls (well, more or less). Strikeouts are guaranteed outs (unless Ryan Doumit is blocking balls behind the plate), and walks are guaranteed baserunners. They leave nothing to the mercy of BABIP fortunes or defensive play behind a pitcher. If you were to solely look at Minor's strikeout and walk rates this season compared to last year, you can see why xFIP and SIERA think that he's been much better than his ERA would suggest in 2014. While he has seen a slight decline in his strikeout rate (22.1% to 20.5%) and a slight increase in his walk rate (5.6% to 6.7%), he's still putting together a solid K:BB ratio.

Pitchers who put together solid K:BB ratios tend to be successful, so what's going wrong with Minor this season? Is he simply the victim of bad luck? Are there problems under the surface for Minor that don't show up in xFIP or SIERA? Or is it a combination of both?

Peeling back the layers a bit, the first thing we can do is look into Minor's batted ball profile. Right from the beginning, we can see he is trading fly balls, down 6% from last year, for more line drive and groundballs. Minor has historically been a fly ball pitcher and has been the beneficiary of great outfield defenses that in turn have allowed him to prevent runs at an above-average rate. This season, he is allowing more line drives, fewer infield fly balls, and more fly balls that are landing over the fence. Again, we can ask the question, is this bad luck over a sample that is currently smaller than 100 innings, or is this real poor performance?

The next step we can take is looking into his swing and contact rates and seeing what direction that they seem to be trending compared to last season. The chart below should make for an easy visual. "O" signifies outside of the zone while "Z" signals inside the zone.

So, opposing hitters are swinging at pitches at virtually the same rate, but making contact at a noticeably higher rate. This, obviously, isn't really a trend we like to see. This suggests that Minor's pitches are either more poorly-located in 2014 than they were last season, have less movement and deception, or a combination of the two. It also may suggest that Minor, while only having his strikeout rate drop a bit this season, should be even lower because of the increased contact.

The next level to peel back is to look at how effective Minors pitches have been, specifically his fastball. For the short and sweet version, these pitch values attempt to measure how far above or below average a pitch has been in terms of runs (baseball's "currency") per 100 pitches thrown. It's a lot simpler than it sounds.

This year (min. 80 innings), the extremes for fastball pitch values are +1.82 runs and -2.60 runs per 100 pitches. About 90% of all pitchers will fall within +/- 1 run. Minor's fastball is currently been worth -1.61 runs/100 pitches, which falls in the bottom 10 of a 132-pitcher sample. This backs up what we have seen with our eyes; his fastball has been poorly-located around the zone and is getting tattooed. It's been terrible, especially after being a plus pitch for him over the past two seasons (+0.60 runs/100 pitches).

He has also been less effective, albeit to a lesser degree, with his slider and changeup. When Minor was at his peak, he was pounding the zone, locating well, and using a mix of all three pitches. Obviously right now, that is not the case. So why is this? Peeling back another layer may get closer to the root of the problem.

When looking at data about Mike Minor this season as compared to 2013, a few things jump out. Most notably, however, may be the change in Minor's release point this season. As you can see in the following chart, courtesy of Brooks Baseball, Minor is releasing the ball at a significantly higher point this season than he was last season. 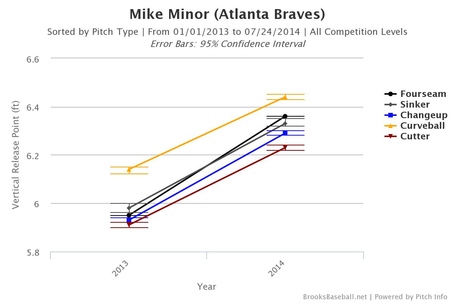 Minor's release point in 2014 is generally four to five inches higher than it was last season for all of his pitches. If you don't believe the data, taking a look at video from the past two seasons confirms what the data tell us. 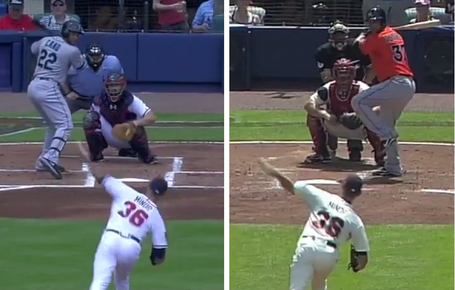 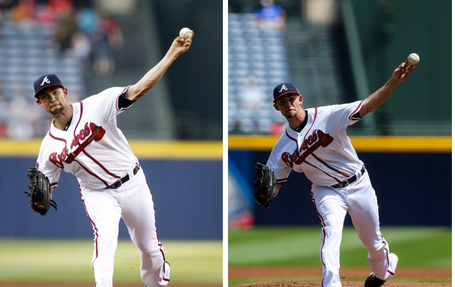 As you can see, Minor is getting more on top of the baseball in 2014 than he was last season, when his release point was more off to the side. Also, when looking at the first picture comparison, it seems that Minor is arching his back forward at his release point, whereas his back remained more solid and upright in 2013. For myself and Andrew, who are decidedly not engineers or physicists, it was slightly perplexing that Minor's pitches would be "flatter" if he were getting more "on top" of the ball than he was last season. So, we reached out to an engineer who better understands these things, Stephen Brown (who if you are on Twitter, and aren't following, you should be), who assisted us throughout this process. He agreed with the theory of the raised release point and offered this explanation:

"Raising vertical release point, in theory, would mean that the pitcher would get more on top of pitches, have more backspin, and a spin plane more parallel to the ground. Using PITCHf/x data from baseballsavant.com, I found his average spin rate and spin plane for both 2013 and 2014. Using a pitch trajectory calculator on MatLab, I plugged in the '13 and '14 values. This predicted a 1.1 inch increase in vertical movement, which is consistent with what was found on Brooks Baseball."

This agrees with the theory that Minor is throwing a flatter fastball (think of an increase in vertical movement as less drop) and when poorly located, it is getting absolutely tagged. Stephen also took it a step further and gave us a look into his poor location,

"Using the PITCHf/x data again, I took his average distance from center of the zone in '13 and '14 on his fastballs. The horizontal location was consistent, but the vertical location was down by around 2 inches and is averaging 0.4 inches above the vertical center of the zone in '14. If we call a pitch that's within a 1-foot-by-1 foot square around the heart of the zone ‘grooved', he's grooving 25% of his changeups in '14 compared with 20% in '13. His groove rate on sliders has gone from 19% to 26% - two of his three home runs on his change have been on grooved pitches while four of the six home runs on his slider have also been on grooved pitches."

This more or less confirms that Minor has been throwing a flatter fastball far too close to the center of the zone and helps explain why he has such a high BABIP despite a normal strikeout rate. Not only is his fastball more poorly-located and flatter, his changeup has also had both of the same issues as his fastball. Normally we would trust the "numbers" on this one and say that his 3.69 xFIP is more of an indication of how he's truly pitched over the beginning of the season and that his .358 BABIP has led him to be extremely unlucky. In this case, however, we tend think his strikeouts are being inflated and his BABIP, while it's still not a stretch to say he's been unlucky, is largely attributable to poor performance. It goes against our better instinct, but in this case, Mike Minor is not the same pitcher he was last season.

Roger McDowell is likely working with Mike on some things related to his release point and delivery. Obviously, not having access to the team to ask these questions, we don't really know what adjustments are being made. If Minor wants to have better success going forward, he will either need to pitch start pitching backwards with his off-speed pitches until he can regain his fastball location, or he must adjust his release point (or something else delivery-wise) to regain the fastball movement and command that he had previously. It's possible that Minor's shoulder ailment has caused him to slightly alter his delivery and release point, despite Minor's recent assertion that an injury has nothing to do with his poor performance. It's difficult to know why this has happened definitively, but adjustments need to be made.

For a pitcher like Minor, who doesn't have overwhelming "stuff" or velocity, he cannot afford to miss with his pitches as he has done in 2014. Being a pitcher who lives in the zone, command is key for Minor, and when he is off, he does not have much room for error. This is obviously a huge question mark for the team, and adjustments for Minor will be very important if the Braves want to contend down the stretch, and hopefully into the playoffs.