Share All sharing options for: Game Thread 5/9: Braves Vs. Cubs

We've officially reached the final 3 games of a 9-game homestand, and to say that it's been rough would be an understatement. The Braves have lost 5 of their last 6 at home, and 8 of their last 9 overall, and are currently going through a rough patch at 18-15. The Cubs, on the other hand, have been going through a rough patch all season, as they're currently at the bottom of the NL Central with a 12-21 record and are only ahead of the NL-worst Diamondbacks thanks to winning percentage.

Both teams will attempt to get out of their respective funks with this upcoming series. The Braves will be sending their best starting arm to the mound tonight, as Julio Teheran will be taking the ball for the home team tonight. He'll also be batting in the 8th slot, because that's still a thing. The Cubs will be countering with Jason Hammel.

And here's some data on the opposing pitcher: 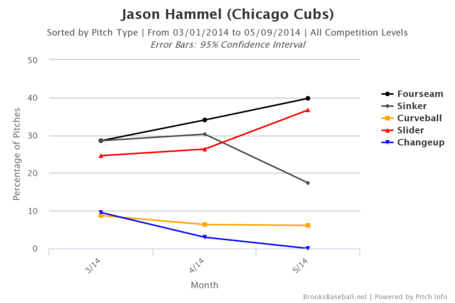