Share All sharing options for: Game Thread 5/30: Braves at Marlins

This has been one of those rough weeks for the Braves so far. After getting skunked by the defending World Series Champion Boston Red Sox over a 4-game series, Atlanta will now try to put that series in the rear-view with a trip to Miami in an effort to exorcise some demons that materialized in this building during their last visit to face the Miami Marlins.

If there's a night to do so, this would be it, as Julio Teheran will be taking the mound tonight. Teheran has been stunning in his last two starts (17 consecutive innings of shutout baseball including a complete game shutout against the Brewers back on May 20th), and also pitched extremely well against the Marlins back in April.

Julio's counterpart in that April affair was Tom Koehler, and he held his own against the Braves offense in that one. He'll be going on the mound for the Marlins tonight.

And here's data on Tom Koehler: 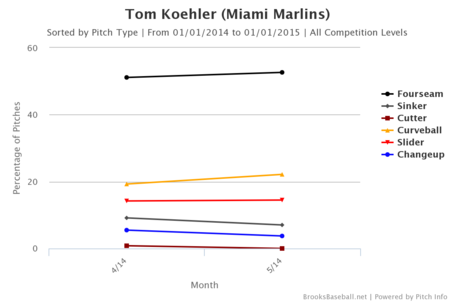