Are We Seeing The Real Ervin Santana?

The baseballs haven't been smelling as rosy for Ervin Santana as of late. Is he still going to be a decent cog for the Braves machine in 2014, or is this a grisly sign of things to come?

Share All sharing options for: Are We Seeing The Real Ervin Santana?

Like most of the rotation, Ervin Santana came into the 2014 like a lion; A charismatic, baseball-sniffing lion who loves hitting. After signing Big Erv on a 1 year deal, his early performances had many people wondering if Frank Wren could maybe fanute a way to keep the baseball-sniffer here even longer. Shoot, I even expressed such an opinion over on Twitter because the man took a photo wearing a Skittles backpack. He still hasn't followed me on Twitter yet, but I forgive him because of that photo and that photo alone. That's a beautiful photo.

What hasn't been so beautiful has been his 3 most recent starts. His ERA has gone up to 4.06, which is still pretty decent compared to the rest of his career, but it's definitely a pretty steep rise compared to where it was earlier. Even though we expected most of the rotation to come back down to Earth after they spent the first month or so pitching in the cosmos, Santana was the one who crash-landed the hardest. If the rest of the rotation took a trip to the moon and came back with no problems and a routine splashdown, then Ervin Santana has been the Apollo 13 of the Braves rotation.

Just take a look at his past three starts. I feel like I should tag this with #NSFW because's it's pretty shocking and if someone were to look at this passing by, they may be offended. But yeah, here goes (table is from fangraphs):

In addition, as noted in the Kevin McAlpin tweet above, his ERA has been a solid 9.00. There is only one proper word to describe that: Yuck.

So, what's been the statistical culprit behind Santana's recent run? We can start by tryinig to take a look at whether or not he's had some bum luck. His BABIP so far is .319, and other than the Cardinals game back on May 16th where his BABIP for that start was at an even .500 (because it's St. Louis and they always seem to have things like luck on balls put in play go in their favor against Atlanta. See 2012 NL Wild Card Game, specifically the bottom of the 8th). .280 and .308 are high numbers as well, but the .500 number from St. Louis seems to be the main culprit that's brought it up to .319 for the season, which would be the 2nd highest number of his career if the season ended today. He had two seasons where his BABIP went above .300, and they were in 2007 and 2009. He ended both of those seasons with a fWAR of 1.1, which is a pretty ominous sign if he continues to keep it up.

The other culprit and probably the biggest culprit here is obviously that low LOB% number. Santana's career LOB% is 72.5%, and for 2014 it's been at 71.2%, which is a shade below the current MLB average for starters of 73.3%. His strand rate for the last 3 games has been at exactly 54%, with Monday's debacle against Boston being the worst of them all at 30%. 10 straight losses or not, you can't give a team like the Red Sox more chances to beat you with men on base; they'll find a way to make you pay. So simply put, Ervin Santana's LOB% number over his past 3 starts is awful. If your LOB% over your past 3 starts is nearly 20 points below the league average, then you're gonna have a bad time.

Now, we look at his rates. For his first five starts of the 2014 season, Ervin Santana's K% was 28.7% and his BB% was 7.0%. If he kept that up, he'd be battling Julio Teheran for the title of being the ace of the staff. That's how good Santana was at the start of the season. Now, if you scroll back up to take a look at that disgusting little table, you can see that for his past 3 starts, Santana's K% has plummeted to 13.8% and his BB% has leaped to 10%. That's obviously concerning, but there's some good news and some bad news here.

#Braves Santana: "I think two-out walks, that’s the main issue right now. So we have to correct that and then move forward."

The bad news is that Santana's career K% is 18.7%, and the only time that Santana had a K% over 20% was back in 2008 when he tallied a 23.9 K% during what was easily the best season of his career with 6.6 fWAR. There's no way that he was going to keep up a nearly 30% K%, but regression was always going to come and in the case of Ervin Santana, regression not only came in, it burst through the wall like the Kool-Aid Man when it came to his K%. 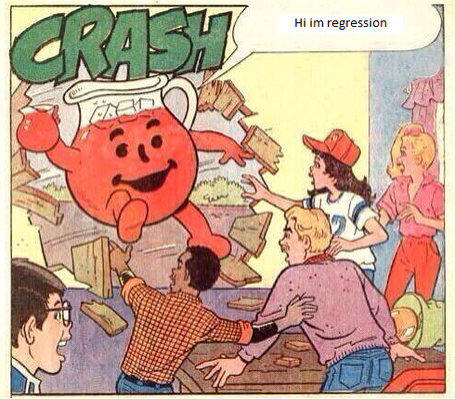 The same could be said for most of his stats. I'm going to post the game logs of his first five starts, just so you can see exactly how hard regression came hurtling through Ervin Santana's living room wall (again, from fangraphs):

The more I look at it, the more I tend to believe that, yeah, regression was going to come. But jeez. That's pretty steep. It's definitely a bit disappointing that our hopes of replacing the injured Kris Medlen with a potential All-Star have been dashed over these past 3 starts, but once again, there's good news to go with some bad news.

The bad news is that Santana's had a weird habit of alternating good years with bad years. Last year, he finished with 3.0 fWAR. The year before? -1.0 in his final season with the Angels. In 2011? 2.6. It goes all the way back to the aforementioned 2007 season, which is when that 1.1 fWAR season was the bottom piece of a sandwich that included a 1.1 fWAR season in 2009 as the top piece and a 6.0 fWAR near-Cy Young 2008 season as the delicious meat of the sandwich. His past 3 starts seem to indicate that he might be on track to have another bad year.

The good news? That might not be the case. Most ZiPS and Steamer projectionss right now have him at 1.2 fWAR at the worst and 2.2 fWAR at best. Considering the circumstances that precipitated his arrival to the Braves, I think most of us would take something between those numbers. His numbers over the past 3 games belong in a dumpster fire, but that's not the Ervin Santana that we should expect to see for the rest of 2014. He won't be pushing ace-status like he was earlier, but this isn't the endgame for Santana, either.

Ervin Santana's been pitching like he's got a bad whiff of some baseballs that were retrieved from a garbage bin in 100 degree heat, instead of pitching like he smelled the sweet scent of a baseball that was dipped in honey and washed with fabric softener that would make Snuggle The Bear beam with sunshine and happiness. He's been bad, yes, but there's still a chance that he won't be this bad forever, or at least until his contract ends at the end of the season.