Share All sharing options for: Game Thread 5/22: Braves Vs. Brewers

We've reached the final game of this long 4-game series, and with the exception of last night's debacle, the Braves have put in a creditable performance against the Milwaukee Brewers, who are still on top of the NL Central.

Now they have a chance to take 3 out of 4 in this series and 5 of 7 against Milwaukee for the season, but they'll have to go through Matt Garza. His counterpart will be Aaron Harang, and the last time these two teams tangled with each other with these two guys pitching, there were no hits for either side until the 7th inning, as both Harang and Garza pitched lights-out baseball.

With that being said, it'd be a folly to expect more of the same for tonight's contest. I admit that saying that Matt Garza had "stepped up his game" in the series preview was a bit of a mistake. Garza's outing on April 2nd was by far his best performance of the season, and he's been especially bad on the road, as you can see in his game log here. Hopefully that trend will continue and the Braves will be able to flex the offensive muscle that they showed during the first two gam -- wait, Dan Uggla is starting? Well then. No Carlos Gomez for the Brewers tonight, but jeez.

And here's data on Garza: 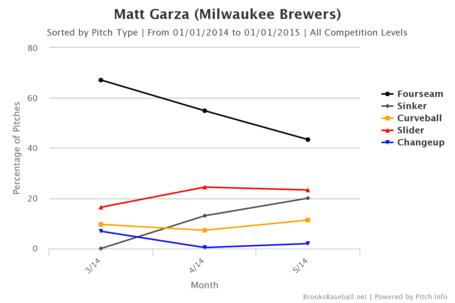