Share All sharing options for: A look back at Atlanta's 2011 Draft

Continuing our recap of the Braves' most recent drafts, today we'll take a look at a handful of players selected in the 2011 draft.

If there was an overall focus in this draft, it was to take college players, naturally a bit older in age, that could hopefully move through the system rather quickly. In fact, Atlanta's first ten picks (and the ten most notable I chose) came from the college ranks. Fast forward three years into the future and we've seen only one player spend time on the Braves active 25-man roster. That player is Gus Schlosser, who has thrown a total of 11 major league innings, all coming in a time of desperate need at the beginning of the 2014 season.

Now, that isn't to say the draft has been a complete failure, but many of these more "polished" players haven't progressed as hoped. Still, there are guys like Tommy La Stella and JR Graham who could play significant complementary roles beginning in as soon as a couple of weeks. Below, I ran through ten of the top names from the draft, including both players currently in or outside of the system.

1. JR Graham, Right-handed Pitcher, 4th Round, 146th Overall, Santa Clara - JR Graham certainly has the highest ceiling of any player drafted in the 2011 class. Altough he struggled for much of 2013 with a shoulder issue, he still checked in at number two on our pre-season top prospect list. Originally drafted by the Oakland A's out of Livermore High School, he passed up the opportunity to play professionally close to home and refine his skills at Santa Clara. Graham wowed scouts in college with his high 90's heater and found his name in top 100 pre-draft lists but dropped to the fourth round due to overblown height concerns. The Braves have been able to develop Graham's raw talent with continued hope of keeping him in a starter role. If the workload proves to be too much, he should service as a high-leverage, back-end, reliever for Atlanta in the near future.

2. Tommy La Stella, Second Baseman, 8th Round, 266th Overall, Coastal Carolina - Everyone's favorite prospect, Tommy La Stella, was drafted as a bat-only second baseman after an impressive junior year (fourth-season) at Coastal Carolina. Not much as changed since then as La Stella's bat as carried him through the minors with hope of joining the big club in the near future. His defense has been described by Braves evaluators as a "work-in-progress," but at the end of the day he will rely on his advanced approach at the plate and great bat to ball skills at the big league level. Overall, La Stella has progressed as hoped and has made him one of the more valuable selections in 2011.

3. Sean Gilmartin, Left-handed Pitcher, 1st Round, 28th Overall, Florida State - Anytime a first round pick is no longer in the system a couple years post-draft, it usually isn't a good sign. Unfortunately, that is the path Gilmartin has traveled as he was traded to the Twins this offseason for Ryan Doumit. The plan for Gilmartin was that he could fly through the minors as an "polished" lefty coming out of Florida State, posting a 130:21 strikeout-to-walk in 120 innings during his senior season. So far, he has failed to find his way into a major league uniform, being held back by the lack of command from both his fastball and secondary pitches. Many evaluators viewed this pick as a reach at the time of the draft, seeing his ceiling as an eventual fourth starter. The book isn't closed yet, but all signs point to an uphill battle for the former 28th overall pick.

4. Nick Ahmed, Shortstop, 2nd Round, 85th Overall, Connecticut - Nick Ahmed is most likely known for being one of the prospects shipped to Arizona in the Justin Upton blockbuster. The Braves decided to sell high on Ahmed after rather impressive 2012 and AFL seasons, while improving his defense at a premier defensive position. Since, he's posted mixed numbers in the Arizona system. The D-Backs are hoping to tap the potential the Braves saw in the polished strong armed shortstop out of UConn. Speaking of UConn, Ahmed, despite good numbers, often played third wheel to college teammates George Springer and Matt Barnes, both whom went in the first round of the same draft. It is hard to see the Braves regretting letting Ahmed go, even if he sticks as a solid major league role player. 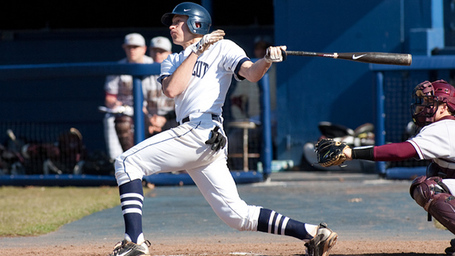 5. Gus Schlosser, Right-handed Pitcher, 17th Round, 536 Overall, Florida Southern - As I mentioned in the intro, Schlosser is the lone 2011 selection to appear in a major league game. The Florida Southern product spent his junior and senior seasons in the rotation and has bounced back and forth in his time with the Braves between both roles. The 6-foot-4 sidearming righty hash't had the greatest start statistically to the 2014 season, but his effectiveness against right-handers will ultimately decide wether he can stick at the highest level. 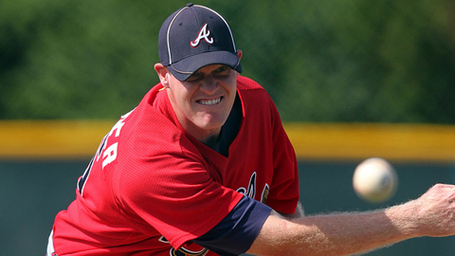 6. Cody Martin, Right-handed Pitcher, 7th Round, 236 Overall, Gonzaga - Cody Martin's path since being drafted as Gonzaga's closer as a senior is a bit backwards from what you'd normally expect. The right-hander has worked his way back into the rotation, transforming into a command and control specialist that allows the movement on his mid-high 80's fastball to keep hitters off-balance. It is quite the contrast from his hard fastball/slider combo that earned him the lowest ERA and average against among NCAA qualified relievers during his senior season. Having Martin as an insurance option at the Triple-A level is a decent return for the 236th overall pick.

7. Kyle Kubitza, Third Baseman, 3rd Round, 115th Overall, Texas State - Kyle Kubitza remains one of the more polarizing prospects in the Braves system. As a junior is college, Kubitza impressed with his power and ability to draw a walk, but lack the consistent swing mechanics and ability to make contact in the zone. Those same traits have stuck with the 6-foot-4 lefty - he walks and has shown he can drive the ball in the gap, but still swings and misses at an alarming rate. This issue might only be further exploited as his rises against top-tier pitching. There has even been small talk about how it might be best to leverage his strong throwing arm from the mound.

8. Ryne Harper, Right-handed Pitcher, 37th Round, 1136 Overall, Austin Peay State - The fact that Ryne Harper has made it to Double-A is quite the accomplishment for a 37th round pick. Harper is now 25, a bit old for Southern League standards, but his 26% strikeout and 8% walk rates at the Double-A level could signal he is ready for a promotion. Equipped with a fastball/slider combo, it is always great to see late round picks prosper, even if they might never get the chance to play at the big league level.

9. Mark Lamm, Right-handed Pitcher, 6th Round, 206th Overall, Vanderbilt - Mark Lamm was yet another "polished" arm the Braves went after in the first few rounds. Drafted as a 23-year-old senior, Lamm has been older than the competition he's faced for most of his minor league career. Now in a relief role in Triple-A, Lamm is struggling to find the consistency around the zone, holding him back from a spot at the major league level. 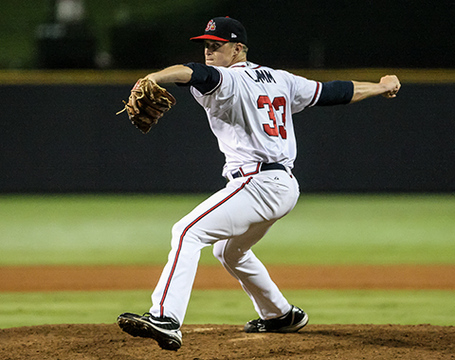 10. John Cornely, Right-handed Pitcher, 15th Round, 476th Overall, Wofford - Despite a 5.82 ERA in college, the Wofford closer put together a rather impressive senior season which earned him a workout from Braves scouts prior to the 2011 draft. The Braves chose the righty who has put up exceptional strikeout numbers (33% career), but has struggled to find the zone and keep the ball in the yard throughout his career. At 25, there is still a sliver of hope, but it doesn't look like he'll be transforming into a asset at the major league level.