Share All sharing options for: Game Thread 5/20: Braves Vs. Brewers

After last night's offensive explosion, the Braves are looking to continue their nice run of form against NL Central teams not named the Cardinals as they look for their 4th straight win so far over the Milwaukee Brewers.

Tyler Pastornicky was rumored to be back in the lineup tonight, but instead, Ramiro Pena will be making another start. He and the rest of the Braves will try to turn their good fortune on offense as of late into a flat-out hot streak, but they'll have to do it against Yovani Gallardo.

Gallardo's last few starts have been kind of rough, but he's still likely to break out of that slump at any time. Another guy who had it rough on his last time out? Julio Teheran. Both guys are lookign to bounce back from less-than-stellar starts in their last outing, but here's hoping that Teheran is the one who comes out on top here.

Here are the lineups, and in extremely late breaking news (as in less than 15 minutes before game time), Evan Gattis has been scratched from the lineup.

And here's data on Gallardo: 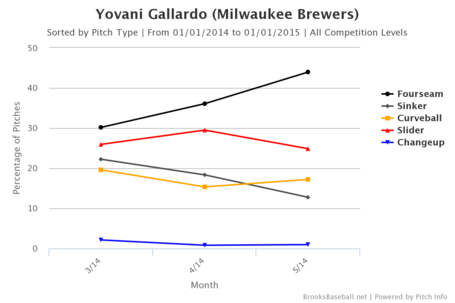