Share All sharing options for: Game Thread 5/11: Braves Vs. Cubs

After going down an extremely dark path for the past couple of weeks, the Braves may have found the light at the end of the tunnel, and it's come in the form of the Cubs.

Now, on this Mother's Day afternoon, the Braves will now be going for their first series sweep since the Reds series from the end of April. They'll have to do it without Justin Upton, who will be sitting this game out after the rough nighthe had last night at the hands of Anthony Rizzo and Jeff Samardzija.

In addition, there's no B.J. Upton and once again, no Dan Uggla. Tyler Pastornicky is the 2nd baseman today, and he will be batting 2nd today, while B.J. will be replaced by Jordan Schafer, who will be batting 9th because batting the pitcher 8th is still what's hot in the streets.

Aaron Harang will be looking to continue his strong start to the season, while the Cubs will be putting their trust in Edwin Jackson to keep the Braves at bay.

And here's data on Edwin Jackson: 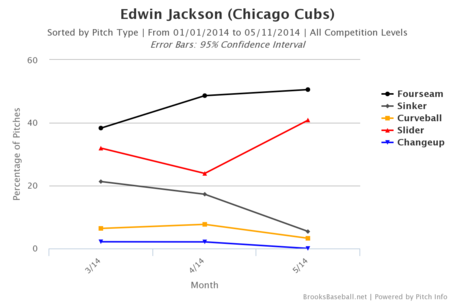