How the Braves' payroll shapes up due to the extensions.

Everyone knew the Braves wouldn't be doing much this offseason. Despite grand thoughts of grabbing David Price or one of the other top hurlers, none of them were really more than mere hopes. The farm system isn't loaded with top prospects. The budget isn't massive. And the Braves just didn't have many holes to fill. They could simply sit back, plug in a few missing pieces, and hope their young, talented team would improve as they all grow toward their peaks. If you were really expecting something to happen, you were probably thinking the team might lock down a young player or two.

Of course, those two became four. Frank Wren and Co. moved like Seabiscuit down the offseason stretch, finishing with a flurry. Signing Freddie Freeman, Julio Teheran, Craig Kimbrel, and Andrelton Simmons to extensions assured the team and fanbase that most of the young core that helped win 95 games last season would be around for the foreseeable future. Locking up that talent was a great start, and many of the deals were fair - you can see why there's risk, but one could also envision how they could each be steals. Considering the team's situation, this was really the best-case scenario for this offseason ... with the notable exception of getting a long-term extension for Jason Heyward.

Now the question becomes how it affects the payroll moving forward. While actual budgetary details are propietary secrets kept by the club, we can at least take a look at the payroll obligations for the future, and then guess at the overall budgets. Here's the player-by-player graph. 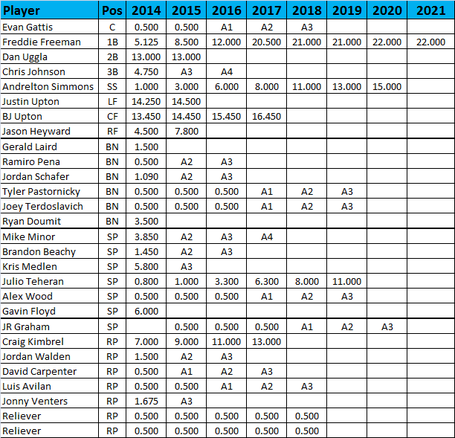 And here are the overall stats.

Any number above is guaranteed money for the players - with the exception of some of the $500K I put there as placeholders for their pre-arb years or someone else's who may replace them. I also added in projected arbitration years to give us an idea of the people who will be making serious though not devastating money. So let's take a year-by-year look.

2014: We know what this looks like. The team theoretically has around $100-105M in the budget for this year. I have about $95M, but given that there are other people on the 40-man roster guaranteed some money, we can add about $3-4M for miscellaneous expenses due to promotions for injuries and September call-ups. So the team really has about $2-7M to play with.

2015: 2015 is the year I was most concerned about coming into the offseason. As the last year of what was the two-year Window to Win, this was the season with a ton of arbitration-eligibles, and they would be advanced eligibles that are no longer in their first years of arbitration. In other words, they cost real money. The nice thing - depending on how one views Dan Uggla - is that no key contributor will hit free-agency after 2014. That means there's no one to replace, and it gives the farm system another year to recover. And given the salaries that are TBD, that $30M reserve will go quickly, meaning the 2014-2015 offseason will likely be quieter than this offseason.

2016: Uggla, Justin Upton, Kris Medlen, and Heyward (for now) are scheduled to be free-agents after 2015, so some room opens up in the budget. While some of the $65M (again very theoretical) reserve will be taken by the 5 players hitting their last year of arbitration, only three - Chris Johnson, Mike Minor, and Brandon Beachy - will be making serious money. So there should be enough room to make a few moves. Tommy La Stella or Tyler Pastornicky will hopefully be able to fill in at second, but there will still be massive holes in the outfield - maybe the entire outfield if BJ Upton doesn't turn things around. Considering there are currently no internal options (a deft 2014 pick with one of the first round picks this year could solve part of this problem, but it should not - repeat SHOULD NOT - be the reason for a pick), these will have to be bought. There's probably room for one major acquisition along with a smaller one - maybe a platoon of sorts.

2017: Ah, the new stadium. Feels nice, doesn't it? Expecting a nice bump in payroll, the Braves can incur the free-agent years of the new contract extensions quite nicely - the nice thing about the years prior to this is that all of them were essentially already planned due to expecting arbitration amounts. Then you look at the arbitration-eligibles (again, they are projected; give me a break), and most of them are first-time eligibles that probably won't break the bank.

Here is the issue, however. Mike Minor will need a hefty sum, in all likelihood, and the Braves will likely need 2 or 3 starting pitchers by then. Luckily, this is also about the time Lucas Sims and Jason Hursh should be ready (and a deft 2014 first-round pick could help here as well). Counting on that is a terrible idea, but if it comes to fruition, the team has a lot of money to work with. Keep in mind, that there remains room in each of these seasons for another significant contract, so don't give up on Heyward. It doesn't have to be Heyward, but it can be. If the pitchers don't work out, the Braves will have to buy them on top of whatever they bought for 2016 aaand a new third baseman, so things could get pretty tight.

2018: BJ Upton, Minor, and (maybe) Kimbrel could be gone at this point. This will give the team more breathing room, but this is really the point where projecting becomes difficult. There are simply too many variables to account for, but the team should have plenty of money to spend - depending on how they spent money leading up to this - to keep the team moving along.

My primary concern coming into this offseason was keeping the young team intact. I don't think I was at all alone in this. While 2014 and 2015 shaped up to be excellent seasons, the seasons immediately following them were filled with doubts and concerns as several central figures in the recent playoff runs would be free-agents. The past few weeks have alleviated many of those concerns - we still can't predict the future, and there will be significant holes that will need to be filled. But here's what I've learned from this exercise: