Share All sharing options for: Game Thread 9/9: Braves at Marlins

Evan Gattis has been one of the more interesting stories of the season. Even ignoring the extraordinary tales of his personal struggles and rise to the MLB, Gattis' season is one for the memories. Skipping AAA and with doubts as to whether he could catch, Gattis was the starting catcher for the first month or so of the season, and he did incredibly well in April, hitting .250/.310/.566 and good enough for a 139 wRC+. If that wasn't good enough, he hit better in May while sharing catching duties and mixing it up in the outfield. He was arguably the most valuable player on the team.

Then came June. Already beginning to slow down offensively, Gattis strained his oblique and missed a month. When he came back, he continued to struggle. After wRC+ months of 139 and 184 in April and May, Gattis had terribad months of 47, 61, and 10. It got so bad that he was demoted to AAA for a few games to "get him ABs".

Since then, he's been on fire, of course. He's hitting .353/.389/.941 this month with as many home runs in 5 games as he had in the last three months. We'll sit here and ask ourselves enough questions to make us silly. Was the early season success a mix of the league not knowing Gattis and a hot stretch? Or were the last few months a by-product of an injury, fewer ABs, and a cold spell? Or is Gattis a mixture of all these things? All we know is that he currently sits on a line of .245/.303/.498, which is good enough for a wRC+ of 117 for the season. What that means for his future can be argued from about a dozen perspectives, but let's just hope the recent success continues into the playoffs. 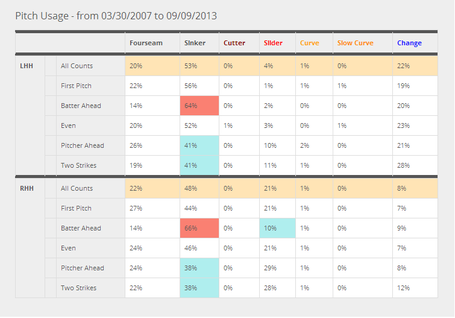 Scouting Report: When it comes to Henderson Alvarez, be ready for the heat. He'll throw a fastball over 70%, and it'll come in there in the mid-90s. After that, his secondaries aren't terribly impressive, but his change-up is pretty solid. The slider gives the batter something else to look for, but it's not enough to scare anyone. Alvarez throws strikes, though, so be ready for that as well.

Analysis: The righty just doesn't strike out anyone. While he keeps his walk rate below 7%, Alvarez's career K rate is just 12%, and even with a low walk rate, that's pathetic. What Alvarez does to help himself is keep the ball on the ground with a GB/FB over 2. That keeps him valuable, but he's not as valuable as the 3.03 FIP indicates. In this case, he's actually closer to his 3.93 ERA due to his crazy low 2% HR/FB rate.