Share All sharing options for: Series Preview: Braves at Marlins

By this point, we all know the Marlins' story.

They're 53-88 on the season, and they're pretty securely in as the second-worst team in the majors. The White Sox is the next-closest team at 57-85, and the Astros fall in as the worst team in baseball at 47-96. While the Astros are essentially guaranteed a 100-loss season, the Marlins will have to go 10-11 to avoid doing the same.

Most of their problems have been the result of their offense. Producing only 461 runs, they are a full 70 runs - 70 runs! - worse than the SECOND-WORST offensive team, the White Sox. Again, none of this is exactly shocking. Giancarlo Stanton leads the team with about 2 wins of production, and at .249/.365/.473, he's been the best hitter on the team by far. Marcell Ozuna is next on the team with 1.6 fWAR, but a lot of that has been defensive value. Christian Yelich has been pretty good for a rookie, but .286/.352/.394 isn't going to hold up the Marlins offense on its own. What's really sad is that the 5th most valuable offensive player is Henderson Alvarez, a pitcher. Most of the team has been replacement-level or worse this season.

The pitching hasn't been very good, either, but it at least has some promise. Jose Fernandez, obviously, leads the charge, and with all due respect to the excellent season that Julio Teheran has had, Fernandez and Yasiel Puig will be battling for the NL Rookie of the Year Award. The rest of the rotation is filled with hard-throwers. Nathan Eovaldi and Henderson Alvarez have done fairly well, and Jacob Turner, while his production has been below-average, still offers some promise.

This team might be pretty good in a couple years, but they obviously aren't at the moment. 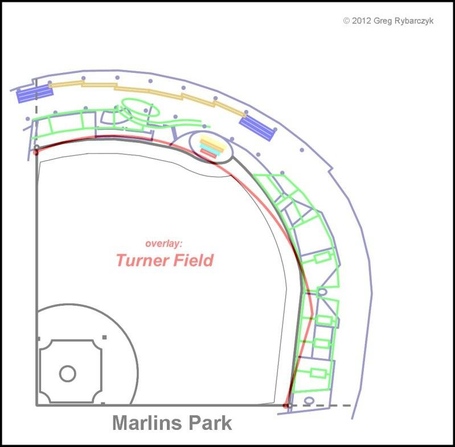