Can the Braves Afford McCann?

Before considering whether they should, do they even have the payroll flexibility?

Share All sharing options for: Can the Braves Afford McCann?

It's the question to which we all really want to know the answer.

Until this point in the season, the question about Brian McCann was largely whether or not the Braves should keep McCann, as in was he even worth investing a large amount of money. But hitting .271/.344/.495 and providing 3 wins in about a half-season's amount of games tends to make one think that he's healthy and productive. Having re-established his value, the question is now how much he will cost. Yadier Molina just signed a 5-year, $75 million contract, and while that should be higher than what McCann could demand because, well, Molina is a perennial MVP candidate without an injury history, McCann could ask for 5 years and probably $13-15 per year because of market forces. Knowing the annual cost, can the Braves even afford it even if they wanted? The answer lies in the new TV money.

Major League Baseball signed new TV deals with ESPN, FOX, and TBS last season, but while they were signed last season, they don't start until 2014. As you might expect, the new TV deals come with substantially more money, and because it was the MLB that signed the contract, the money is split evenly among teams. That amount of money has been reported to be an extra $20-25 million a season for each team. With the Braves likely facing a $95-100 million payroll before the TV deals, adding even just $20 million would be a huge boon.

Here's a look at just how much it can help. 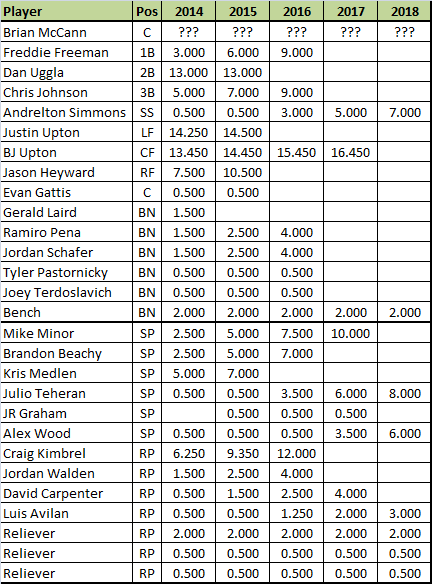 The above chart has my salary projections for the next few seasons for each player. The nice thing about the Braves' current situation is that most of the core players will be back next season, so we can get a pretty decent picture of what the payroll will look like. Most of the salaries are "projected" because a lot of players will be entering arbitration, and I tried to look at comps for each player and guess. I'm not claiming this is perfectly accurate - I added in vague terms like "Bench" and "Reliever" to account for possible expenses - but I think it's at least a good start. Either way, here are the totals you really want to see.

Looking first at the 2014 payroll, you can see most of the money is spoken for. The team is incredibly young, but almost all of the core players will be in arbitration or making free-agent money next season. While there aren't many double-digit salaries, the salaries do start to add up quickly, and as you can see, there isn't enough room for McCann ... unless the new TV deal adds the expected money. Then the Braves would have room to play with.

And the Braves are probably hoping that TV money really adds to the payroll because of 2015. It's the last year of Dan Uggla and Justin Upton's contracts as well as the last year of guaranteed control of Jason Heyward, and as such, it's basically the last year of this team's window to win. But if that TV money isn't added to the payroll, the team will likely be looking to dump salary. That could happen by trading Chris Johnson, Kris Medlen, Craig Kimbrel, or a combination of the three - Uggla's a maybe, but I have to imagine Atlanta eating a lot of the remaining money, thus not saving much. Adding that TV money would give the Braves just enough room for McCann.

Things appear to open up in 2016, but that would be a team without Justin Upton and Jason Heyward. If the payroll doesn't increase, then the Braves decision to keep McCann is basically a decision not to keep either of the young outfielders - that is unless they move Kimbrel and Chris Johnson's salaries. If the payroll does increase, the Braves will likely have enough room to keep one of Heyward or Upton in addition to McCann while still being able to fill a hole or two. If the Braves no longer have Kimbrel or Johnson, they could keep both young outfielders.

After 2016, it becomes kind of hard to really project payroll because of all the uncertainty. The Braves would certainly have room to keep McCann at that point because all of the young core players the team has now would be eligible for free-agency. At that point, however, keeping McCann, Heyward, Upton, and a free-agent-eligible Freddie Freeman would be difficult unless the Braves could keep the FA salaries around $15-17 million a year for each player.

So let's get back to McCann. Whether the Braves can keep him basically depends on the new TV money. Without the possible extra $20 million, keeping McCann probably isn't a good idea as we would probably prefer Heyward in his prime to McCann declining after a few years, but the team would have room for him next season. With the additional money, the Braves definitely have the room for McCann, but one could still ask if it's wise to spend that kind of money on a player with a lot of mileage and a major shoulder surgery in his injury history who is headed toward his decline years.

The last question you might be thinking is, "Why wouldn't they spend that additional money on the payroll?" There are a couple reasons. One: each team might not get quite that much money. While the $20-25 million numbers have been fairly widely reported, I don't know if everyone is sure that's what each team gets. Two: teams spend money on more than just the big league payroll. The Braves could increase the money they spend in other areas - ballpark renovations, renovations around the stadium, draft/international signings, scouting, player development, etc. - and that would take away from the additional payroll. If the additional money is only $10-15 million at first (maybe the payments escalate?) and the Braves decide McCann just isn't worth the investment, the payroll will look lower than what might be possible.