Share All sharing options for: Game Thread 9/17: Braves at Nationals

Ryan Zimmerman is one of the more interesting players on the Nationals. He's an above-average hitter - .287/.353/.479 for a 121 wRC+ - with excellent range and outstanding hands. Earlier in his career, this made him elite player as he even contributes a little on the bases. Of course, his defense has deteriorated over the last few years with shoulder problems making throws across the diamond more difficult for the third baseman. He is so bad, in fact, that he's frequently the butt of jokes, and even worse, the Nationals are seriously considering moving him off the position due to the throwing problems and Anthony Rendon's emergence. Ryan Zimmerman is an above-average starter at third base, and he can be elite if he fixes the throwing problems. But he's just a little better than average if he moves to first base, though he might be an elite defender there. Despite all that, he's having a fantastic September as he tries to put the Nationals on his back, hitting .323/.373/.790. That .790 SLG is not a typo. He's hit 9 home runs this month. 9! 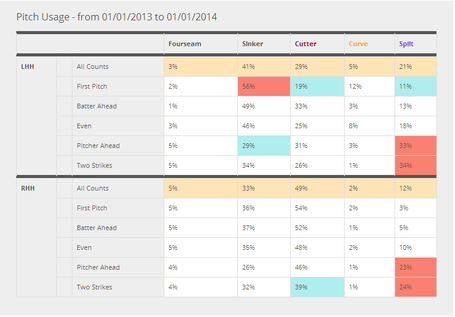 Scouting Report: Dan Haren doesn't throw as hard as he used to. Instead of the low-90s, he;ll sit in the higher 80s, but he gets away with it largely because of his command and that he uses three variations of fastball - 4-seam, cutter, and sinker. While he adds a curveball and splitter to those fastballs, it's the splitter that hitters have to watch, and he relies on it heavily to get hitters out.

Analysis: Haren hasn't had the statistical season he was hoping for. Even while the 5.05 ERA isn't really indicative of his performance, the 4.15 FIP isn't particularly good, either. Haren has increased his K% to 21% and lowered his BB% to 4.5%, but the 13% HR/FB rate has really done him in. That shouldn't be surprising given the loss of velocity. If he leaves it in the middle of the plate, it's gonna get hit hard. The second half has been much kinder to him, however, as he has a 3.30 FIP and a league-average HR/FB of about 10.5%.