Share All sharing options for: Game Thread 9/11: Braves at Marlins

As I think we've all noticed, Elliot Johnson seems to have taken the second base spot in the lineup for the moment. Despite the Fredi-Uggla connection, Fredi has decided to bench Uggla - though the late-inning defensive replacement role for Uggla seems ... unwarranted - in favor of the twice-DFA'd Elliot Johnson. To this point, it's hard to argue with the decision.

As Uggla's hitting line has finally become below-average (94 wRC+), the bat that made him playable has become more of a liability, and while Elliot isn't anything to marvel at when he hits, his .279/.295/.395 line isn't much worse than Uggla's (89 wRC+). In addition to hitting nearly as well as Uggla, Johnson has added baserunning and defensive value while playing, which has made him worth about a half of a win in 15 games played. Uggla has been worth about a win all season.

Expecting One T to continue his offensive production doesn't seem to be a good idea, but as of this moment, there's little harm to seeing how this hot hand playing out. Though Uggla is likely still a better hitter than his overall line indicates, his continued erosion in the strikeout and line drive department are cause for concern. I don't expect Johnson to continue hitting as he has, but at least when he's not hitting, he's doing other things well. 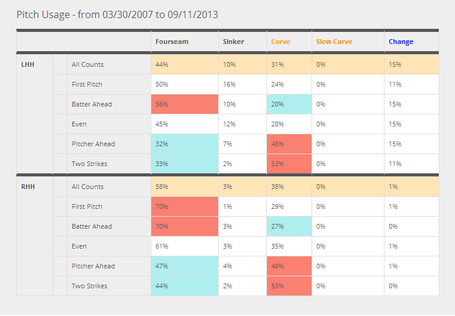 Scouting Report: It's hard to not be impressed with Jose Fernandez. With a fastball that he dials up to the mid-to-upper 90s, a nasty curveball, and a very good changeup, Fernandez has all the makings of a bonafide ace. The curveball is obviously his go-to pitch, and while he won't throw his changeup to RHH, he doesn't really need to. He's a guy you just enjoy watch pitch.

Analysis: The stats match the scouting report here. The 28% K rate is well above-average, and that goes along with a perfectly average 8% BB rate. Fernandez even keeps the ball on the ground at an above-average clip, so he really has everything going for him. His 2.64 FIP is incredible, and over 200 innings, he's likely to be a 6-7 win pitcher at that pace. He won't get there this season, however, as tonight looks to be his final start.