Julio's back and the Marlins are in trouble. Heeeyyaaaa, Julio's back.

Share All sharing options for: Game Thread 9/10: Braves at Marlins

It should be pointed out that Andrelton Simmons leads the team with 4 wins produced to this point of the season. While most of that is due to his otherworldly defense, I want to also talk about the strides he's made on offense.

He's currently hitting .249/.294/.387, which is good for an 88 wRC+. An 88 is below the league-average, but it's not bad for a 23-year old shortstop, especially one who provides elite defense. Obviously, players go on to have good halves and then never again, but Simmons has shown some real signs of improvement in the second half. It shouldn't be surprising to see a young player make adjustments, and that's hopefully what we're seeing from Simmons. Even a little offense makes him a monster player. 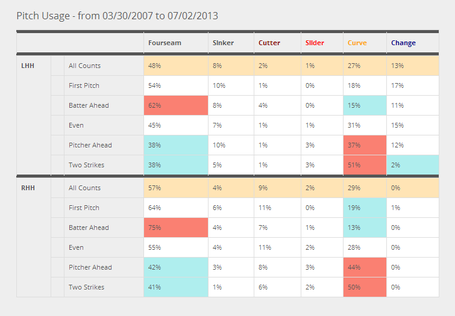 Scouting Report: Tom Koehler is mainly a two-pitch pitcher. He'll come at you with a low-to-mid-90s fastball and a decent curveball. Against lefties, the righty pitcher will add a change-up as well, but when he's ahead in the count, look curveball. Not much to see here.

Analysis: Koehler does a better job of striking out hitters - 17% - than yesterday's starter, but he's also apt to walk quite a few more - 9%. He remains viable by keeping the ball on the ground, but he's been a bit homer-prone in his first 130 innings of MLB pitching. This isn't a guy the Braves should struggle against.