Can they go for a baker's dozen?

Share All sharing options for: Game Thread 8/7: Braves at Nationals

During the Middle Ages, bakers were apparently a sneaky lot. You'd go into the bakery and ask for a certain order of bread, and while you would get what appeared to be your order, the inside of the bread was often hollow. At this point in baking history, the usual order was 12 rolls. In order to prevent this shortchanging from happening, King Henry III issued the Assize of Bread and Ale that scaled the price of the bread to the weight of it instead of simply the number of rolls. Bakers became wary of "cheating" their customers, even if unintended, and started giving out 13 rolls instead of the normal 12 in a dozen. That way, the extra roll should make up for any possible "mistakes" while baking. Hence the term "baker's dozen". 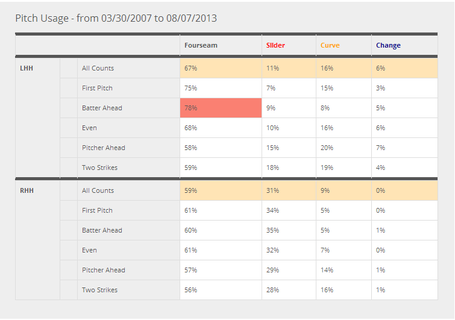 Scouting Report: For Jordan Zimmermann, the discussion really begins and ends with the fastball. Throwing it 60%+ of the time, it's his best pitch, and it's hard - averaging 93-95 mph. Zimmermann adds a solid slider to the mix, but while it's solid to a bit better, it isn't the strikeout weapon one would hope for. The righty also has a curveball and changeup, but the change is used very rarely. The focus needs to be on Zimmermann's fastball with a secondary glance at the slider.

Analysis: Zimmermann is basically the same pitcher he's been over the past three seasons - an underrated 2/3 pitcher. Striking out 18-19% of hitters and walking 5%, Zimmermann's peripherals haven't really changed. His GB/FB rate, however, has, and he's been becoming an increasingly more groundball-dependent pitcher, going from 0.94 in 2011 to 1.60 this season. So while his FIPs have remained fairly constant despite a rising HR/FB rate, his xFIP has lowered because he is simply issuing fewer flyballs. Zimmermann is a very good pitcher who continues to improve.