Jason Heyward Is Primed For A Monster Finish

Quietly, the Braves' young right fielder is having the one of the best years of his career.

Share All sharing options for: Jason Heyward Is Primed For A Monster Finish

Jason Heyward's young career has been one of ups and downs. After bursting onto the scene as a rookie in 2010, Heyward was injured for most of 2011 and disappointed. After a bounceback 2012, many thought Heyward was ready to take the next step this year. An appendectomy and some terrible luck on batted balls have muted his numbers so far this season, but a closer look shows Heyward is ready to take that next step.

Early in his career, one of the biggest knocks on Heyward was his propensity for grounders. During his first two seasons, of the balls Heyward put in play, over half were grounders. Of the three possible outcomes for balls in play - ground balls, fly balls, line drives - grounders are usually considered the worst. Line drives go for hits about 70% of the time, where fly balls and ground balls do about 20%. But fly balls have a chance to go over the wall, which makes them preferable to ground balls. Most of us can remember Heyward's propensity to roll over balls and ground out weakly to the right side early in his career. Since his rookie season, where he posted a GB% of 55.1%, Heyward has sliced his GB% every year. So far in 2013, Heyward's only putting up a GB% of 42.4%.

The decrease in grounders is encouraging, but perhaps even more encouraging is that that decrease has been accompanied by a marked increase in the number of line drives Heyward is hitting. Jason's LD%, which was a mere 13.1% in 2011, has jumped all the way up to 22.6%, good for 20th in the National League. Heyward's LD% is better than every (qualified) Brave not named Chris Johnson or Freddie Freeman.

Digging into the data a bit further, we can see that Heyward is hitting hard pitches (fastballs, sinkers, cutters) and breaking pitches (curves, sliders) better that at any other point in his career. Offspeed pitches (changeups, splitters) are still giving him trouble, but it's a much smaller sample size too, so keep that in mind.

Heyward is also showing excellent zone recognition. As the previous chart shows, Heyward is having trouble making solid contact with offspeed pitches. So, as a result, he's stopped swinging at them as much. Heyward is showing a much more patient approach at the plate, taking more pitches than he has in 3 years. The approach is paying off, as he's currently 3rd on the Braves in BB% at 11.6%. Additionally, he's seeing 4.06 pitches every plate appearance, which is good for 7th in the National League. (Teammate Dan Uggla is 3rd with a 4.12 mark.) 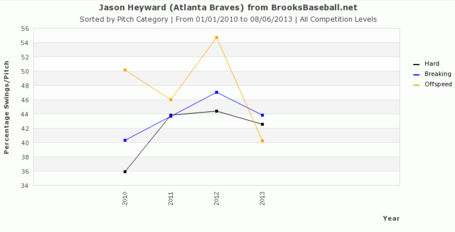 And here's the kicker: despite a career-best line drive percentage, Heyward's still sporting a BABIP that's .038 points below his career average. In a nutshell, this mean's Heyward's been pretty unlucky with his batted balls this season. And the eye-test seems to back this up: it seems like every game we see Jason scorch a line drive right at a defender. With an elevated LD%, coupled with Heyward's speed, it wouldn't be unreasonable to assume he could sustain a BABIP in excess of his career average for the rest of the season. And if we take a look at the last two weeks, we can see that that's exactly what's happened.

Due to Heyward's appendectomy and resultant mid-season slump, his season line will not look great at the end of the year. But don't let that fool you, Heyward has improved at the plate in myriad ways this season. Don't be surprised if he continues to carry the Braves for the rest of the season and translates that success into a monster 2014 season.

*All graphs courtesy of Brooks Baseball*