Share All sharing options for: Game Thread 8/6: Braves at Nationals

- The Braves have six position players worth over 2 wins, according to FanGraphs.

- Three bench players - Jordan Schafer, Evan Gattis, and Gerald Laird - are all around 1 win of value.

- 2 wins is considered to be about average production for an entire season of a starter, and 1 win is the typical amount for a decent bench option.

- Julio Teheran and Tim Hudson are basically tied around 2 wins.

- Craig Kimbrel and Jordan Walden are both above 1 win to this point in the season.

- Only 7 players currently sit under replacement level, and B.J. Upton and Brandon Beachy have a pretty solid chance to put themselves into the positive column by the end of the season. 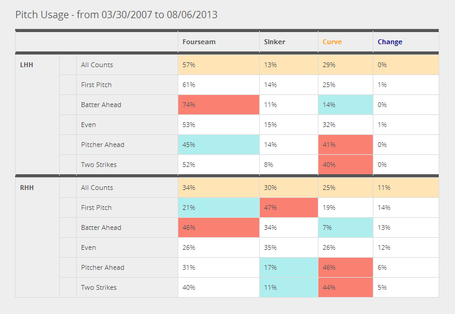 Scouting Report: Gio Gonzalez mainly throws two pitches - one of his two kinds of fastballs and a lethal curveball. While he does have a change-up, he essentially never throws it to a left-hander, but oddly enough, he mostly throws it early in the count to lefties when he does throw it. The basic idea is that Gonzalez will throw 92-94 mph fastballs and attempt to finish the batter off with a curveball.

Analysis: Gonzalez isn't pitching substantially different from last year with one exception - home runs. His K and BB rates - 25% and 9%, respectively - are pretty close to what he did last season, but his HR/FB rate has ballooned from 6% to 12%. Chances are that neither of those are particularly "real" - we should expect something closer to his career mark of 10% - as the batted ball data doesn't suggest any real difference from last season, and his xFIPs of 3.38 and 3.44 should a remarkably similar pitcher.