Time for the brooms?

Share All sharing options for: Game Thread 8/29: Indians at Braves 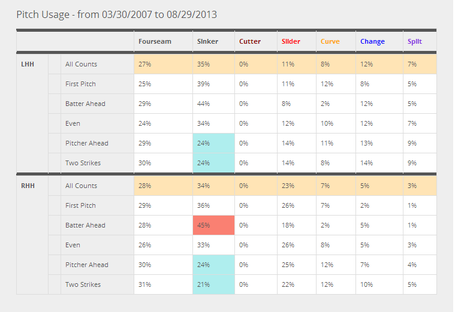 Scouting Report: Ubaldo Jimenez has always been known as a flame-thrower. At his peak, he could hit the upper-90s, but his velocity has been dramatically declining over the last few years and now sits 91-94 mph instead of 96-98 mph. Jimenez adds a slider that used to be a wipeout pitch, but it has decreased in effectiveness as well. While he throws mostly fastballs and sliders, Jmenez adds several more pitches to his repertoire, though none are pitches he can depend on every night.

Analysis: While Jimenez has never been known for his control, his BB rate has really increased over the last few years - going from a peak of 9% to nearly 13% - and a corresponding decrease in strikeouts and increase in home runs hasn't helped. Jimenez has somewhat re-found a way to miss bats, but the walks and home runs still hurt his overall game. He's been better than he was last year, but he hasn't been a strong rotation member this season. He'll throw fairly hard, keep it on the ground, and strike out a few guys, but he's also apt to walk the park.