BJ and Uggla are back!

Share All sharing options for: Game Thread 8/28: Indians at Braves

*wonders if anyone reads this part anyway* 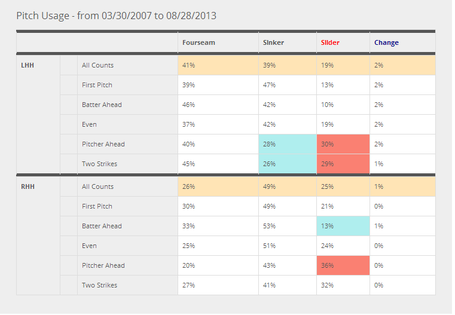 Scouting Report: Sinker, slider, sinker, sinker, slider. That's about what you get with Justin Masterson. He's essentially a two-pitch pitcher who slings it in there from a low, low 3/4 angle. Despite the limitations of having two pitches and a low arm slot - fewer pitches to worry about and giving lefties a loooong look at the ball, respectively - Masterson has been an above-average pitcher for most of his career by keeping the ball on the ground.
Analysis: Masterson is having one of his best seasons so far. He's missing more bats - 24% K rate instead of his normal 17% - while adding more sliders to his arsenal than ever before. While the righty doesn't have masterful control, his ability to keep the ball on the ground - a 58.5% GB% that ranks as the best in the MLB - makes him a very good pitcher to have around. As for the splits, they're pretty gnarly as his FIP is a full run and a half higher against lefties than righties. Probably would have been a good night to start Terdoslavich instead of BJ or B.J. or the older Upton.