Share All sharing options for: Game Thread 8/27: Indians at Braves

While Alex Wood certainly performed a bit better as a reliever - most would - the young lefty has continued to perform well as a starter. The key now is how teams will adjust to seeing his unique delivery a second time, and we'll just have to wait and see on that front. But the signs are certainly encouraging. Looking at his velocity since he started:

You get a little of the screen capture, but that's not important. The strips to the right are Wood's starts - more of a gap between them because there is more of a gap between appearances - and the ones to the left are his relief appearances. As one would expect, his velocity has decreased due to the need to maintain stamina, but he's still averaging in the 92 mph range, which is above-average for a lefty starter. 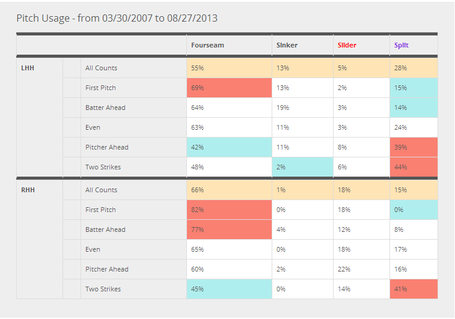 Scouting Report: Salazar is a 23-year-old right-hander in the midst of his first 30 professional innings. As one can see from the chart, he relies heavily on the fastball. The four-seamer comes in at an average of 97 mph, and the sinker - used more against lefties - comes in at 95. He throws hard. Salazar's second pitch is easily his splitter. Pitchers don't throw many splitters anymore, but despite it playing up a bit due to rarity, it is a good pitch. He will add in a slider, but it's often well behind the fastball/split combo in effectiveness. And he basically only uses it against righties. Expect a lot of fastballs, and he's been a bit homer-prone so far.

Analysis: Salazar's peripherals are excellent so far - 32% K% and 8% BB%. The FIP of 4.25 doesn't really do him justice as he's given up home runs on 25% of the flyballs he's allowed, and his 2.63 xFIP is more demonstrative of how he's performed so far. Will that continue? It's hard to say, but as you might expect, it would be difficult to keep up such a pace. For one, that's just a rare degree of peripherals. Secondly, he only has two pitches that he's comfortable using. Just like Alex Wood, hitters will eventually make adjustments, but that doesn't mean Salazar will just turn into a pumpkin. Should be an interesting match-up tonight.