The Evolution of Julio Teheran

Once a fastball/changeup artist, he's now mixing things up.

Share All sharing options for: The Evolution of Julio Teheran

I can't believe how good Julio Teheran has been.

No matter how much I tried to convince myself that Teheran's second trip through AAA was a byproduct of having his mechanics messed with, having an emotional season after being disappointed by not making the team, or a combination of those with something else, I couldn't convince myself that Teheran was going to be anything more than a 4/5 starter. He, of course, has been much more.

Let's take a little trip down memory lane to see just how surprising this season has been. Signed out of Colombia for $850,000, Julio Teheran was highly-touted from the get-go. At the young age of 16, he was throwing in the lower-90s, and many figured he would throw harder as he aged, grew, and filled out. Teheran would receive an easy start to his professional career in 2008 as the Braves let him pitch just 15 innings as a 17-year old in rookie-level Danville, and they followed that up with 80 innings the next season spread across a repeat in Danville and a promotion to Low-A.

Heading into the 2010 season, Jason Heyward was The Man, but Julio Teheran was already a household name in prospect circles despite the 100 innings of professional pitching. Baseball America ranked Teheran as the 3rd-best prospect in the system and 51st overall. Scouts were tantalized by the low-to-mid 90s heat that developed as expected, and the young Colombian's curveball seemed to beat out the change-up as his most impressive second pitch.

A stellar season of 140 innings spread across 3 levels shot Teheran's prospect hype through the roof, bolstered by a changeup that had come into its own. Leapfrogging Freddie Freeman, he was the top prospect in the system heading into the 2011 season and Baseball America had him ranked 5th overall in the minors. Pitching the season in AAA as a 20-year old, Teheran dominated with a 2.55 ERA over 144 innings, and he received a few appearances in the majors. Though he wasn't particularly good in the majors, pitching there at the age of 20 is impressive.

Because there's really nowhere to go from 5th overall, Teheran's ranking stayed exactly where it was heading into 2012, but there were some concerns, including an only average strikeout rate and a curveball that had seen its grade drop once again. What happened next was a disaster. Six home runs in a Spring Training game against the Detroit Tigers and several bad innings later, Teheran had gone from the presumed 5th spot in the rotation to the bus headed toward Gwinnett.

The 21-year old righty spent 2012 in Gwinnett getting lit up on the scoreboard to the tune of a 5.08 ERA. He was only 21, but repeating a level and doing worse was a cause for concern. Teheran was still young, but that's a pretty serious misstep. Rumors abounded about Teheran being unhappy down in AAA and/or the Braves messing with his mechanics, but the only thing everyone knew was that the top prospect in the organization had regressed. While he still had a hard fastball and an outstanding changeup, the curveball was now graded as a below-average pitch for the first time, and there were concerns about just how good Teheran would be. Julio Teheran was still the top prospect in the organization, but he dropped into the middle of Top 100 prospect lists.

Then this season happened. After spending most of the off-season in trade rumor headlines, Teheran was the presumed 5th starter yet again, but no one really knew what to make of him. Despite the doubts and concerns, the 22-year old who will turn 23 next January has had an excellent season - 150 IP, 21% K%, 5.5% BB%, 0.97 GB/FB, 2.96 ERA, 3.69 FIP, and 2.0 fWAR. While people believed this was possible from Teheran, few could have expected how he's done it.

Always known for his top-notch changeup, Teheran has abandoned it this year. Look at the graph below. 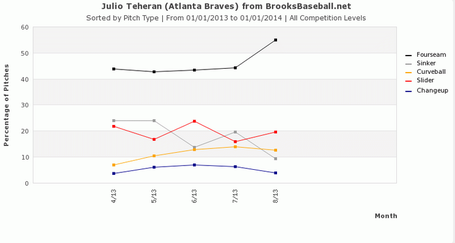 Once his best pitch, Teheran's changeup has been his least used pitch ALL SEASON. Even more remarkable, Teheran's second off-speed pitch was his curveball, and that's basically been used just a little more than his changeup. Instead of using what had been his bread-and-butter, Teheran has used a slider that's rarely, if ever, been mentioned as a POSSIBILITY. Now, it's one of his most used weapons with two strikes.

Along with the slider usage, you should also take note of the four-seam vs. sinker usage. Teheran has been depending much more on his four-seam fastball and beginning to abandon the sinker. Part of the reason is below.

As the chart shows, his velocity has increased during the season, which is pretty normal for pitchers. One can presume that the increased velocity and confidence from his success has lessened his need for the sinker, and as his usage of it has declined, his GB/FB has as well.

That could spell trouble as more flyballs generally means more home runs, but Teheran has off-set the increase in flyballs by striking out more hitters over the course of the season.

Julio Teheran's metamorphosis has been astounding. Once known as a fastball/changeup artist without much of a third pitch, Teheran now has 4-5 pitches, but he focuses more on the fastball, slider, and curveball while basically casting aside the changeup. He's done all of this seemingly within a few months and after a humdinger of a season in 2012, and, although he's changed much about his pitch selection, he's become one of the better pitchers on the Braves' staff.

The change is truly remarkable. It reminds us how difficult scouting and player development is. It's not that everyone can just be great with a few tweaks, but that the unforeseen is a way of life with young players. They are constantly changing and evolving, and it's been a joy to watch Teheran begin to blossom as a major-league starter. We just have to remember that he's not an ace ... yet.

(thanks to Baseball America for the scouting reports and brooksbaseball.net for the charts)