Share All sharing options for: Game Thread 8/17: Nationals at Braves

Tonight's pitching match-up of Stephen Strasburg and Mike Minor is a fantastic one. Let's compare some stats, shall we?

Remarkably similar, aren't they? Pitcher A is Strasburg, and Pitcher B is Minor; the GB/FB (groundball to flyball rate) should have been the major tip-off as Minor is pretty fly ball-heavy. Despite their obvious difference in publicity, Minor has been worth about half a win more than Strasburg due to the additional innings, but for all intents and purposes, they've been very similar pitchers this season. Strasburg, because of the sheer velocity, has the higher ceiling and will likely have the better career should both stay healthy, but it's nice to note just how good Minor has been this season. 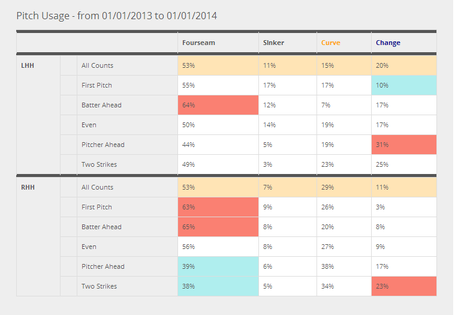 Scouting Report: We all basically know the scouting report on Strasburg at this point. He throws a mid-to-upper 90s four-seamer with a two-seamer that sits in the lower 90s. To the heat, Strasburg adds a devastating curveball and a changeup that can touch 90. The former first overall pick has explosive stuff, and if he's on, hitters won't have much of a chance. The Braves, however, have done relatively well against him.

Analysis: The main reason for the drop in FIP has been Strasburg's 3 percentage point drop in K rate - 30-27% - but his FIP remains 3.09. He's seen a small decrease in velocity, but he's still averaging 95.3 mph. The righty is also using his fastballs a bit less while incorporating his secondaries a bit more, but again, there's not a huge difference. Either way, he's still a tough pitcher to face.