Share All sharing options for: Game Thread 8/16: Nationals at Braves

There's been some discussion of the promotion of Phil Gosselin over Tommy La Stella, so let's go through the line of thinking.

Phil Gosselin isn't a good hitter - currently at .277/.326/.343 with a 6% BB% and 15% K% in Gwinnett - and Tommy La Stella is known for having a pretty good stick for his position - .342/.413/.476 with nearly identical 10% BB and K rates but in Mississippi. If the team was simply looking for offense, they made the wrong choice as it would be hard to argue that Gosselin was better than La Stella.

But that's not the only concern here. One concern could be service time, but at this stage of La Stella's career - he's 24 - service time and options really aren't that much of an issue. La Stella, however, does show glimpses of having a regular to above-average regular ceiling due to the bat, so his DEVELOPMENT is an issue. There's not a whole lot to be gained or lost from a physical/game standpoint because it's basically just a few weeks, but with a huge lead, is there a reason to take La Stella off the track he was on?

Needing just a body to fill in for the next few weeks, Gosselin makes sense as he's moved around a lot more than La Stella. Janish can fill in at second, and Gosselin can act as the utility infielder. Would we prefer to see a more interesting La Stella play 2B every day while letting Janish continue to be the utility guy? Sure. But Gosselin does have more defensive versatility.

The next argument is in favor of home-field advantage and simply fielding a better team. It's hard to say what the Braves still feel he needs to work on. Hitting well at AA certainly doesn't mean much, but again, there's a case to be made that he'll hit more than Janish or Gosselin, especially given the K and BB rates. La Stella's defense, however, has often led to concerns, and while being worse than Uggla seems like a difficult proposition, it is actually possible. There has been talk of having to move La Stella off the position, so it's not a given that he's ready defensively. Being better doesn't always mean the player is "ready" and that promoting him will lead to the maximum benefit.

Finally, there's some merit to promoting guys like Gosselin. Given the 14.5 game lead, the Braves don't have to make "the right move" for the best possible team. As an organization, you want to let all the players know that they'll be rewarded for playing well, even if they're not a "top prospect," and the Braves can use this as an example.

Would I prefer to see La Stella get the starts at 2B over the next few weeks? Sure. But I can also see why he's not. Plus, there's always the chance the Braves trade for someone and make all of this moot. 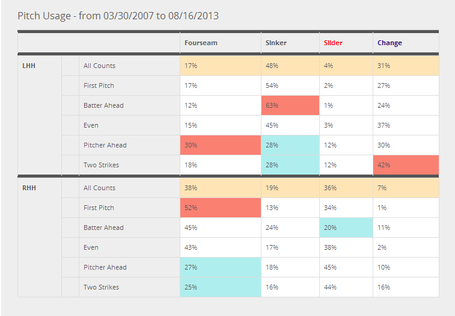 Scouting Report: Taylor Jordan focuses on his low-90s sinker. After that, it depends on what hitter he's facing. If the batter hits left-handed, he'll focus on the change-up, and he'll throw it quite a bit. Against right-handed hitters, he'll throw the slider while also throwing more four-seamers - you don't want sinkers coming back in toward the bat.

Analysis: Jordan has done pretty well this season. His K rate is only 13%, but he's walking batters at a 4% clip, which makes up for the low K rate. Jordan also keeps the ball on the ground with a 2.32 GB/FB, and the combination of grounders and few walks helps make Jordan a solid addition to the club for now. Will the league catch on, strike out less, and walk more? Maybe, but Jordan has done a solid job in his 45 innings.