A new era for Braves baseball is upon us.

Share All sharing options for: Braves moving to Cobb County

From the Marietta Daily Journal...

The Atlanta Braves are expected to announce today the team plans to relocate to Cobb County with a new stadium being ready for the 2017 season. They will be leaving Turner Field after their 20 year agreement expires at the end of the 2016 season..

The new stadium will be built near the intersection of I-75 and 285. The current site is under contract and set to close in early 2014.

We will have more information on this breaking story throughout the day.

We'll keep the thread updated as the day progresses with additional commentary.

The deal to move the Atlanta Braves to Cobb County involves $450 million in private financing arranged by the county and another $200 million put up front by the baseball team that first moved to Atlanta in 1965, we’re told.

There is a new website up, Home of the Braves dot com with a message from John Schuerholz

Here is the overview of the project with the new site plans below. 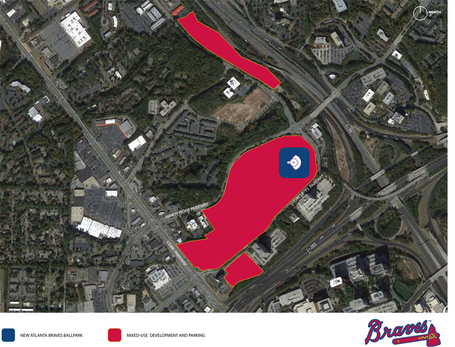 Confirmed the @Braves will build a new stadium in Cobb County for the start of the 2017 season. First reported by Marietta Daily Journal.