With how well Los Angeles has been hitting so far in the series, tonight's elimination game already looked like a big challenge for Atlanta. Add in the fact that the Dodgers are bringing back Clayton Kershaw to pitch, and well, it's gotten just that much tougher. With Kershaw on the bump for LA, the Braves are sticking with veteran right-hander Freddy Garcia for game four.

First pitch is set for 9:37 p.m. ET on TBS. Here are the lineups for both teams: 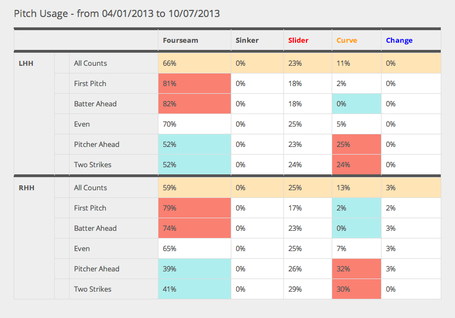 On the year, Kershaw sports a 1.83 ERA, 2.39 FIP, and 2.88 xFIP to go along with a fWAR of 6.5 and a rWAR of 7.9. No matter your metric of choice, he's been incredibly good this season. While he maybe wasn't quite as sharp as usual in his game one start, Kershaw still dominated Atlanta's lineup, walking three while allowing just one run, three hits and striking out 12 batters.

His strikeout rate is slightly above his career average 25.6%, while he's drastically cut down on his walk rate this year. It's at a career low 5.7% on the year. Kershaw gets a good number of ground balls, with a ground ball rate of 46% to go with a 81% strand rate and 5.8% HR/FB rate.

Looking at his arsenal, Kershaw works off of his fastball, and for good reason. His four-seamer is the most valuable pitch of its kind this season, according to Fangraphs, and has been worth almost 40 runs above average. It has an average velocity of just under 94 miles per hour in 2013, and a 47% ground ball/ball in play rate. It's not a huge swing and miss offering, with a whiff/swing rate of 16%.

Kershaw's slider averages just under 86 miles per hour, and he throws it pretty equally to right-handed and left-handed hitters. It has the best whiff/swing rate of all his pitches at almost 41%, and has a 50% ground ball/ball in play rate on the year. Not a bad combo there.

His final main offering is a curveball that has an average velocity of just under 75 miles per hour this season. It has a whiff/swing rate of just over 39%, and a ground ball/ball in play rate of almost 58%, the best of any of his pitches. Kershaw will also sparingly mix in a changeup against right-handed hitters as well.