I hate calling any non-elimination game a "must-win," since there will still be another game no matter what. Today's game, however, seems like an exception. Down 1-0 in the best-of-five series, Atlanta sends Mike Minor to the mound against Los Angeles' Zack Greinke knowing that an 0-2 deficit would be almost impossible to recover from.

First pitch is set for 6:07 PM ET on TBS. Here are the starting lineups for both teams: 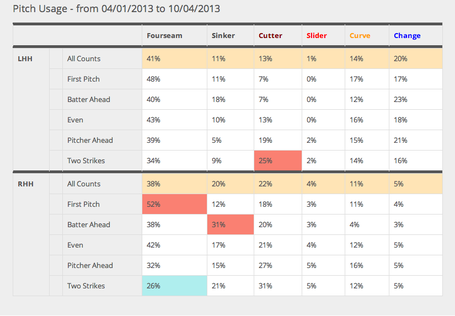 Greinke has benefitted from a slightly high strand rate at 80%, and posted a 8.6% HR/FB rate that's just below his career average. A fly-ball pitcher early in his career, he's gotten away from that in recent year, and has a 46% ground ball rate in 2013.

He also throws a cutter that's really effective, that Greinke loves to use late in the count against either handed hitters. It has an average velocity of just under 87 miles per hour, and boasts a 35% whiff/swing rate and a 54% ground ball/ball in play rate.

Greinke's changeup, which he mainly uses against left-handed hitters, has the second best whiff/swing rate of all his offerings at almost 29%. The pitch also has a huge 61% ground ball/ball in play rate, so it's a really good pitch no matter how you look at it. Expect him to challenge Heyward, Freeman and McCann with it tonight.

Lastly, he throws a curveball that has a 23% whiff/swing rate and a 51% ground ball/ball in play. Greinke is good, but Atlanta should have its chances tonight if continues to work counts and catches a couple breaks in the process.