Share All sharing options for: NLDS Game One Open Thread: Dodgers at Braves

Well, it's finally here. Game one of the National League Division Series gets underway tonight at 8:37 PM ET on TBS. Kris Medlen will toe the rubber for Atlanta, while top N.L. Cy Young candidate Clayton Kershaw will get the ball for Los Angeles.

Here are the starting lineups:

Dodgers:
Notes:
If you're looking for some extra reading to kill time before the game, ESPN Stats & Info has a couple articles of interest. First, here's a look at a few Braves/Dodgers stats to know heading into the series.
Also, they have a good breakdown of how Atlanta's pitchers should look to attack Dodgers right fielder Yasiel Puig. While he's been struggling lately, Puig is of course a dynamic offensive talent that can change games when he's going right.
Clayton Kershaw 2013 pitch usage 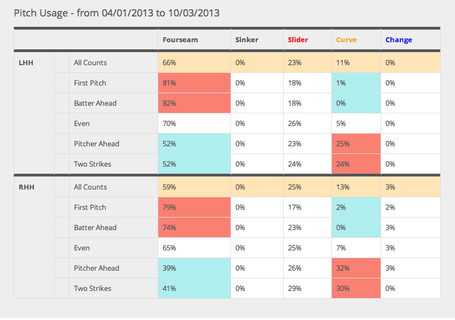 His strikeout rate is slightly above his career average 25.6%, while he's drastically cut down on his walk rate this year. It's at a career low 5.7% on the year. Kershaw gets a good number of ground balls, with a ground ball rate of 46% to go with a 81% strand rate and 5.8% HR/FB rate.

Looking at his arsenal, Kershaw works off of his fastball, and for good reason. His four-seamer is the most valuable pitch of its kind this season, according to Fangraphs, and has been worth almost 40 runs above average. It has an average velocity of just under 94 miles per hour in 2013, and a 47% ground ball/ball in play rate. It's not a huge swing and miss offering, with a whiff/swing rate of 16%.

Kershaw's slider averages just under 86 miles per hour, and he throws it pretty equally to right-handed and left-handed hitters. It has the best whiff/swing rate of all his pitches at almost 41%, and has a 50% ground ball/ball in play rate on the year. Not a bad combo there.

His final main offering is a curveball that has an average velocity of just under 75 miles per hour this season. It has a whiff/swing rate of just over 39%, and a ground ball/ball in play rate of almost 58%, the best of any of his pitches. Kershaw will also sparingly mix in a changeup against right-handed hitters as well.