On the Economics Of Sunk Costs, Or Why Atlanta Shouldn't Be Afraid To Cut Dan Uggla

Share All sharing options for: On the Economics Of Sunk Costs, Or Why Atlanta Shouldn't Be Afraid To Cut Dan Uggla

Most human beings are risk-averse creatures. A human who is risk-averse will attempt to minimize uncertainty whenever they are exposed to uncertain situations. For example, let's assume I'm offering you two ways to make money. The first choice is to accept a flat sum of $1 million. The second choice is a coin flip - heads will net you $2 million but tails will net you nothing. In this situation, almost all humans would chose the first option. The expected payouts for each choice are exactly the same, but the first offers no risk whatsoever, while the second offers considerable risk of being left with nothing.

The school of behavioral economics tells us that risk aversion is due to a similar concept known as loss aversion. Now let's change the example above a little bit. Suppose that choice 1 was a flat sum of $4 million, and suppose that choice 2 was again a coin flip: heads nets you $10 million, but tails again nets you nothing. A perfectly rational decision maker would take choice 2 without hesitation; The value of choice 1 is $4 million, while the expected value of the coin flip is $5 million (50% chance of nothing + 50% chance of $10 million = $5 million). If stuck with this decision, what would you take? I don't know about you, but I'd take choice 1, and several behavioral economic studies indicate that most people would do the same. So if choice 2 is the rational choice, why then would almost everyone take choice 1 - the flat sum of $4 million? It's because we as human beings are averse to loss. The potential feelings of loss and regret from losing the coin flip overwhelm our rational tendencies, and push us to avoid the risk. Put another way, losing something hurts. Most humans would rather not lose $4 million just for a chance at even more money.

Let's look at another example to further highlight how most humans are averse to the feelings of loss. Suppose you splurged and paid $200 for a really nice seat near home plate in the first Braves-Nationals series for 2014. Now suppose you get there and it's a disaster of a game: the Braves are losing 10-0 by the 5th inning (I know it's crazy, we're pretending!) and it's pouring rain. You know you'd be much happier at home where you can be nice and dry and doing something enjoyable instead of watching the Braves lose in the pouring rain. You want to go home, but there's a nagging voice in your head telling you that you just spent 200 bucks for this seat, and you should damn well take full advantage of it! If you had a cheap, crappy seat in the outfield, you wouldn't think twice about leaving, but since you splurged on such a nice seat, you tough it out and slog miserably through the rest of the game. This is an example of the sunk cost fallacy.

Sunk costs are costs that have been incurred in the past and cannot be recovered. In the case of our ticket example, the $200 we paid for the prime seat is a sunk cost, because regardless of whether or not we watch the rest of the game or go home, that $200 expenditure is already gone. The sunk cost fallacy is when we allow past expenditures (sunk costs) to cloud our decision making because we're afraid of that feeling of loss or waste. Have you ever caught yourself having any of these thoughts? "Well, I already paid for this food so I should keep eating even though I'm full" or "Well, this book/movie is terrible but I'm already halfway through so I might as well finish it," If so, than you've fallen victim to the sunk cost fallacy.

Here's one final example of the sunk cost fallacy in action; it comes from a 1985 paper by economists Hal Arkes and Catherine Blumer entitled The Psychology of Sunk Costs. Arkes and Blumer set up the following scenario: Suppose you pay $100 on a ticket for a ski trip. Later, you find a more enjoyable trip for $50 and buy a ticket for it too, thinking you can just go on both trips. Suppose down the road you realize the two trips overlap, and you can only go on one of them. Which trip do you choose to go on? Arkes and Blumer proposed this question to a large sample of people, and more than half of them stated that they'd take the $100 trip. It might not be as nice of a trip, but to them the loss seemed greater if they forwent the $100 trip for the $50 trip. Once again, that's the sunk cost fallacy at work: the effort to try and negate the feeling of loss prevents you from realizing the best choice moving forward.

I'm sure you probably see where I'm going with this by now: Dan Uggla is that $100 trip. The Braves have already invested gobs of money in Uggla so far; they've paid him more than $35 million over the last 3 years, and are on the hook to pay him $26 million more over the next two ($13 million/year for 2 years). But, despite these salaries being paid in the future, they are sunk costs. Barring a miraculous trade (and I wouldn't bet on it), the Braves will be on the hook for the full $26 million remainder of Uggla's contract, regardless of whether or not he plays another game in a Braves uniform.

The Braves should avoid falling into the trap of the sunk cost fallacy when it comes to making a roster decision on Dan Uggla. For better or worse, Atlanta should play the best second baseman on their roster, regardless of how much they're paying to said player. Fredi Gonzalez and Frank Wren showed they were willing to do just that down the stretch in 2013, benching Uggla for a large swath of September and then leaving him off of the NLDS roster completely.

But benching Uggla for half a month and the playoffs is a far cry from cutting him outright. Doing so would admitting that the organization has lost hope for Uggla "figuring it out." They should not be hesitant to cut if they do determine he's beyond hope, but that is ultimately a decision for Frank Wren and Fredi Gonzalez, and one I do not envy them in having to make. 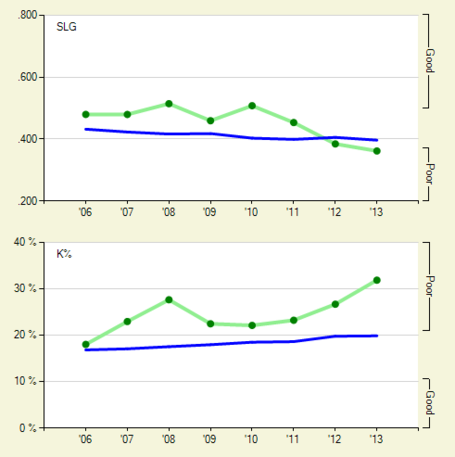 For a player whose whole game is predicated on his bat, these trends are very troubling, and there's little to no sign that Uggla can turn them around as he enters his age-34 season. Even more disastrous than his bat is his glovework. All metrics, both standard and advanced, hammer Uggla's defense. His range and arm are both well below average, and those aren't likely to improve with age either. His cringeworthy defense combined with his oh-God-did-he-really-just-swing-at-that approach at the plate was so bad that Baseball Reference said he was worth a stunning -1.3 WAR in 2013 - good for third lowest in all of baseball among players with 500 PAs.

In conclusion, there's plenty reason to believe the Braves would be better off with someone else manning second base moving forward. Of course, there are still future costs to be considered. Cutting Uggla could make Atlanta seem unattractive to free agents or negatively impact clubhouse chemistry. We in the statistics community try to stay away from such assertions, as they're impossible to quantify, but you can bet it's something Frank Wren may have to consider before making any kind of move. Then there's always the chance (albeit a small one) that Uggla does "figure things out," and were he to be cut, the Braves would incur that cost in terms of production lost.

All that's left is for Frank Wren and Fredi Gonzalez to weigh those potential future costs against the benefits of letting someone else play second base. If Wren and Gonzalez believe, as I do, that the increased production at second from some combination of Elliot Johnson, Paul Janish, Tyler Pastornicky, and Tommy La Stella is worth the future costs of cutting Dan Uggla, then they should thank Uggla for his service and send him on his way. The $26 million that Uggla is owed by the organization should have no bearing on Wren and Gonzalez's impeding decision on Uggla's future with the Atlanta Braves. Bad contracts are certainly a downer, but Atlanta shouldn't let sunk costs cloud their future judgement moving forward.