Hammering Hank and Stan the Man

Stan Musial, one of Hank Aaron's boyhood idols, passed away at the age of 92 yesterday. Here's a look back at Musial and his impact on baseball and Hank Aaron.

Share All sharing options for: Hammering Hank and Stan the Man

I have a deep and abiding hatred of the St. Louis Cardinals. I'm not sure how it happened since I come from a family of St. Louis Cardinals fans. I was born in Memphis, Tennessee and I lived there for the first 10 years of my life. My father's family all lived in West Tennessee. Years before the AAA Redbirds started playing in Memphis, West Tennessee was Cardinals territory. In fact, much of the South was Cardinals territory. Before the Braves moved to Atlanta and before every home in the South had cable television, the Cardinals were the closest thing the south had to a baseball team. In living rooms across Arkansas, Mississippi, Tennessee, Kentucky and Alabama, there were radios turned to KMOX, the super powered AM radio station that broadcasts out of St. Louis. Thousands of southern baseball fans listened as Dizzy Dean call Stan Musial's first at-bat in 1941. They listened as Jack Buck and Harry Carey called his last at-bat in 1963. Both were singles.

Again, there are very few people in my family who are not fans of the St. Louis Cardinals. My Uncle Mike was fortunate enough to make a trip up to St. Louis where he got to see Stan the Man play. My Uncle Larry grew up in the St. Louis area and although he was more of a Browns fan at the time, he got to see Musial play a number of times. Here in Atlanta, I meet old time baseball fans quite regularly who got to see Hank Aaron play. I worked with an older consultant on a project one time who lived in New York for a few years when he was a kid. He got to see Joe DiMaggio and Mickey Mantle play together during Mantle's rookie season. He got to see Willie Mays play center at the Polo Grounds for the Giants. I'm jealous of all these men, especially my Uncles.

I suppose my hatred of the Cardinals started in 1982, after I had been living in Georgia for a year, when they swept the Braves in the National League Championship Series. I certainly didn't care for Whitey Herzog in the least. So, when I say I have a deep and abiding hatred of the St. Louis Cardinals, you should read that as I've hated the St. Louis Cardinals since 1982. Historically, they remain one of my favorite teams ever, if for no other reason than they fielded five of my favorite players ever. There was Bob Gibson, the hard throwing right hander with the temper. There was Lou Brock, the great speedster. There was Curt Flood, who sacrificed his career fighting the good fight. There was Red Schoendienst who was a solid player and an even better man. (Not to mention, he was also a member of the 1957 World Champion Milwaukee Braves.) There was Stan the Man.

You don't have to justify being a fan of Stan Musial. If you say you love Stan Musial to someone, and they have any knowledge of baseball, they get it immediately. They understand that Musial is, along with Hank Aaron and Willie Mays, one of the three greatest players in the history of the National League. They understand that despite his unparalleled consistency that Musial was always a little underrated. (Leaving him off the All-Century team that included 10 outfielders was the result of nothing less than stupidity.) They know that anytime Musial was shown on television after his career, he always had that smile on his face. They know he was, truly and in every way, The Man. 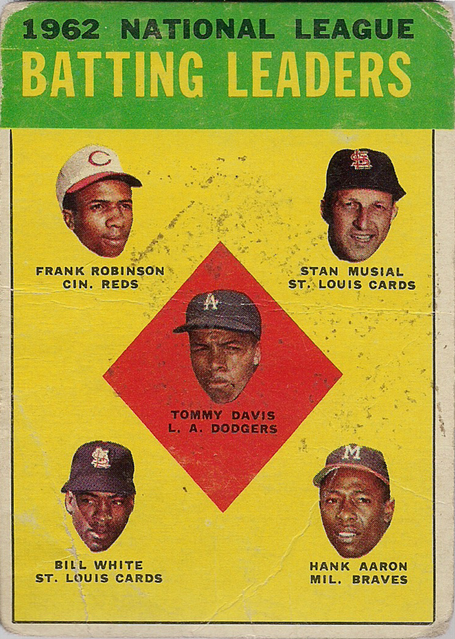 There was a young black kid growing up in Mobile, Alabama who loved baseball and idolized two players. The first was Jackie Robinson, for all of the obvious reasons. After all, a young man of color who dreamed of playing in the major leagues was no longer engaging in fantasy after Robinson's debut with Brooklyn. The other was Stan Musial. That young man was Hank Aaron.

In many ways, Hank Aaron's career was far more comparable to Stan Musial than to his contemporary and fellow Alabamian, Willie Mays. I think you can make an argument that Willie's career peaks were slightly higher than Aaron or Musial. While defensive metrics, especially when applied historically, are to be taken with a grain of salt, Mays was undoubtedly the best defensive player of the three. Musial and Aaron played, essentially, league average defense. Still, year after year, both produced. Both peppered the league leader boards in a variety of categories throughout their years in the big leagues. In the early 1970s, when many National League records began to fall to Hank Aaron, it was the records set by Stan Musial that he was, by and large, breaking. Both men, year after year, produced and continued to do so when many thought they were too old to play. (Hank Aaron hit 40 home runs at the age of 39 and Stan Musial hit a remarkable .330 the year he turned 42.)

Near the end of Stan Musial's career, he and Hank Aaron would both tour Japan with a group of major league all-stars. They were roommates for that tour and became good friends. For the day and age, that might seem surprising, but to anyone who knows about Musial, it really isn't. When a few Cardinals were threatening to not take the field against the Dodgers and Jackie Robinson, Stan Musial never participated. When racial slurs were slung out of the Cardinals dugout towards Don Newcombe, they were never hurled by Stan Musial. Bob Gibson considered him the nicest man in baseball. He treated everyone as a gentleman because he was a gentleman.

I don't want to overstate the comparison between Musial and Aaron. They were very different men. While they were both shy, Musial took to carrying a harmonica where he would often play "Take Me Out to the Ballgame" or serenade a fan with "Happy Birthday". He loved to wade into the crowd at Busch Stadium and shake the hands of his fans. As many who read "The Last Hero", Howard Bryant's biography of Hank Aaron know, there is a difference between Hank Aaron and Henry Aaron. Hank Aaron is the dignified public figure that stands tall over the game of baseball with dignity and class. He's the man who kept mashing home runs in the face of the furious anger of many racist fans. He's the man who fought and encouraged baseball to include more minorities at all levels. He's the man who is, to this day, one of the sport's great ambassadors. Henry Aaron is, on the other hand, still the shy boy form Mobile. He still seems to carry the scars that were inflicted upon him during the home run chase and from growing up in the segregationist south. They are very different men, but both very good men and among the greatest to play the game.

Yesterday, Stan "The Man" Musial passed away at the age of 92. Considering all of the awful sports news that has been riddled upon us recently, from a contentious Hall of Fame vote to a cyclist's disgrace to a phantom dead girlfriend, I think it's important to take a moment and celebrate the life of the great Stan Musial. Stan was from the age and played in a city where you weren't a bigger than life figure that lorded over your fans, you were one of them. His presence will be missed.

Considering the number of years they played together in the National League, I was shocked to discover that Hank Aaron and Stan Musial only appeared once together on a baseball card during their careers. That was the 1962 Batting Average League Leaders card from the 1963 Topps set. Still, it's a fine card with a nice collection of ballplayers. (Incidentally, the card represents the season where the 42 year old Stan Musial hit .330.) They have, rarely, appeared together on cards in recent years. Most of these have been released with very low serial numbers, often 1 of 1, and usually feature relics or autographs from both. The dual auto 1 of 1 cards sell in the 2,500 dollar range. Ouch.

If you are looking for a great keepsake of both Aaron and Musial, I'd recommend finding a copy of the 1959 Sports Review Baseball magazine. The picture, used as the top of this post, is amazing. It has been selling in the 30 to 50 dollar range on eBay, but might be ticking upward now.