Share All sharing options for: Five to Collect from Great Braves Pitching Seasons 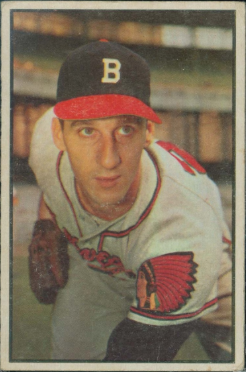 When the Boston Braves packed up and moved to Milwaukee before the 1953 season, they brought with them the most exciting young star in the National League, Eddie Mathews, and the best lefty in the game, Warren Spahn. Mathews may have been the rising star, but Spahn had already established himself as one of the greats. Spahn dreaded the move to Milwaukee at first, but the enthusiasm and excitement of the crowds would inspired him and he turned in one of the best seasons of his career.

How good was Warren Spahn in 1953? His win/loss record was an excellent 23–7, and those 23 wins led the National League. His league leading 2.10 ERA was spectacular, and gave him an ERA+ of 188. Dig down further, and you realize the stats were no fluke. He only gave up 7 hits every nine innings and his WHIP of 1.058 not only led the league, but was also his career best. If you wanted to look for any holes in his performance, he fell to fifth in the league for strikeouts after leading the league the last four seasons the Braves were in Boston. I doubt the Braves minded the drop in strikeouts. After all, 8.5 WAR seasons don’t come around that often, even for a pitcher the caliber of Warren Spahn.

I suppose it’s a shame that his 1953 Bowman Color baseball card features him in a Boston Braves cap, but there’s nothing that can diminish the impact of this spectacular card. At the time, most baseball cards were black and white photographs that were then painted with color. Our images of many of the great players from the period have been tainted by the painted look of most of the cards. A set from this period with pure, beautiful color photography is invaluable if for no other reason than it gives us a look at what these players really looked like.

With Spahn, we can see that he looks younger than his 32 years. One look at his eyes, and you can see his infamous mischievousness lying just below the surface. The beautiful reds and blues stand out and look great. I’d like to see manufacturers of today go back to this type of posed shot as well. For all these reasons, this card has been long considered one of the great cards of a Braves player. It is also, quite simply, one of the great cards of the period. 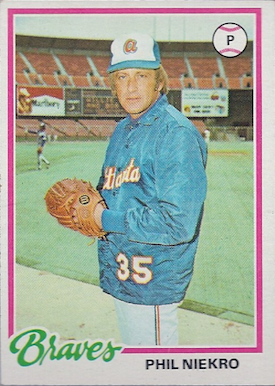 For all that, Phil Niekro found himself finishing sixth in the Cy Young balloting. If he had played on an even slightly better baseball team, Phil Niekro would have won 25 games. If he had been pitching for the Dodgers or the Phillies, he might have won 30. As it was, with the 93 loss 1978 Atlanta Braves, he would take the loss in nine games in which he pitched a complete game. Niekro provided his value by going out and pitching and pitching and then, pitching some more. He is one of the most valuable pitchers to have ever played the game and it’s unfortunate that he doesn’t seem to get his due from fans outside of Atlanta.

It’s hard to imagine Topps putting out a more boring card than Niekro’s 1978 Topps card. There’s just something wrong about seeing Knucksie wearing his warm up jacket with artificial turf behind him. Ugh. To tell the truth, the card doesn’t really stand out as particularly boring for that year. In 1978, Topps specialized in boring. Everything about the set was dull. There’s no reason that Niekro’s card should be any different. Still, it was an amazing season for the game’s greatest knuckleballer. There’s nothing boring about that.

It’s hard to exaggerate the impact that Tom Glavine’s magnificent 1991 season had on the Atlanta Braves franchise. I would argue that it was his Cy Young winning performance that year that carried the team that year. If not for his performance, in 1991 and the following season in 1992, the Braves aren’t a World Series team. If the Braves aren’t in the 1991 and 1992 World Series, they don’t sign Greg Maddux before the 1993 season and trade for Fred McGriff during the 1993 season. No player is more responsible for the start of the Braves amazing streak of division championships.

In 1991, the only major traditional stats that Glavine led the league in was wins and complete games, and even then, he tied for the lead in both. His strength was his lack of weakness. He battled and was good to great every time out. He was the most valuable pitcher in the league posting an amazing 8.2 WAR, which was almost three wins better than the next closest pitcher.

At the time, I wasn’t much of a fan of the 1991 Topps set. I have no problem with minimal designs, but the 1991 design seems to lack any spark at all. Fortunately, Topps got a great photo of Glavine to memorialize this important season. Any Braves fan who ever watched Glavine pitch knows that face. Glavine battled, start after start, and this card captures that.

To this day, I find it amazing that we got to watch Greg Maddux pitch every fifth game for 11 straight seasons. It isn’t often that you get to watch a guy and know that you are watching someone who will go down as not simply great, but as one of the best ever. The 1995 season was the year where the Atlanta Braves finally won it all, and the season Greg Maddux posted that year was stunning. He was 19–2 with a 1.63 ERA. His ERA+ was an insane 260. He led the league in complete games, and shutouts, and WHIP, and home runs per nine innings pitched. He was undeniably better than everyone else who did what he did that year.

Photographers for the major card manufacturers had a habit for capturing Greg Maddux with the funniest of faces. It has happened so often that it’s become something of a running joke among Maddux collectors. His 1995 Upper Deck card is no joke. In the middle of his full wind up, he’s looking in at the plate and is deadly serious. That’s the Mad Dog we all know.

As a Braves fan, there was only one thing you could say after Smoltz’s wonderful 1996 season. “It’s about time.” Year after year we waited for Smoltz to dominate from the first game of the season to the last. His struggles were well known. 1996 is the year where he finally put it all together. We had all watched him rise to the occasion time and time again in the big clutch moment. What we hadn’t seen from John were consistently great starts throughout an entire season. That’s what he delivered in 1996 and he was rewarded with the Cy Young award.

The 1996 Donruss set would be perfect if that foil box at the bottom center of each card were just a tad smaller. That said, this is one of the finest Smoltz cards you will see. Like the Glavine and Maddux cards pictured above, the wonderful photography shows Smoltz looking fierce as he proceeds to being his heater to the plate.