On MLB, Civil Rights, and the Rise of Modern Card Collecting

Share All sharing options for: On MLB, Civil Rights, and the Rise of Modern Card Collecting 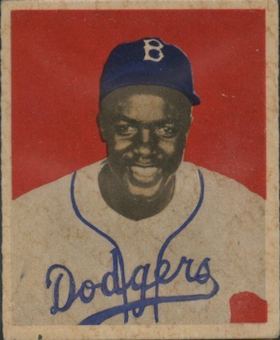 Moses Fleetwood Walker played his last major league game late in July of the 1884 baseball season as a member of the Toledo Blue Stockings. His season ended in injury, and injuries were not an uncommon occurrence for the young black catcher. His pitchers, often disgusted at having to pitch to him, would intentionally throw pitches other than what he had called and was expecting. He returned to the minors and attempted to work his way back to the big leagues. Instead, both of the major leagues of the time, the National League and the American Association, banned black players.

All those that sacrificed for those others are heroes, and we know many of their stories. We know the story of the preacher from Atlanta who led the movement, stood up for countless others, and paid with his life. We know about the forty-two year old woman who, tired of giving in to every humiliation inflicted upon people of color in Montgomery, was arrested for refusing to give up her seat on the bus. Before Dr. King had even graduated from Morehouse and before Rosa Parks said her dignified "no" to that bus driver, Jackie Robinson wore the uniform of the Dodgers and integrated big league baseball. He endured the vitriol of the fans and the hatred of many of his fellow players. It was a shot across the bow of the establishment and it started a tidal wave of progress that could not be turned back. 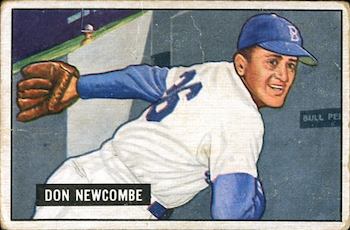 He wasn’t the movement’s first hero of course. There have always been those who fought for justice. Still, Jackie Robinson, as the first black player in Major League Baseball during the modern era, was a legitimate hero of the civil rights movement. He was, in fact, vitally important. In the words of Dr. King, "He was a sit-inner before sit-ins, a freedom rider before freedom rides." His ascension to the big leagues was a strikingly important moment in the battle for civil rights. He was, for a long time, the single most public face of the movement as a whole.

His rise was not inevitable. It was the result of his own hard work and a few other people who were determined to do what was right. His success paved the way for Larry Doby and Hank Thompson, who would follow that same year. He would be joined in the majors by teammates Don Newcombe and Roy Campanella. Others would follow like Sam Jethroe of the Braves and the great Monte Irvin of the Giants. It’s impossible to know exactly what would happen had Robinson not taken those first steps in 1947. Maybe if he had played poorly it would have set back the entire movement. Maybe the Indians would have still given Doby his shot that July. On the other hand, it’s not impossible to believe that it would have been years before integration began. After all, it was over a decade after Robinson’s debut before the Phillies, Tigers and Red Sox integrated.

So, it is noble that Major League Baseball celebrates both the civil rights movement and their own role in the movement every year. Don’t forget, however, that victories in these fights is ultimately bittersweet. Jackie Robinson’s rise does nothing to erase the hideous times that came before. Nothing can make up for the fact that men like Cool Papa Bell or Josh Gibson, among countless others, never had a chance to play a game of major league baseball. (Likewise, no act of government will ever make up for slavery or the many indignities visited upon people of color in all these years after.) That is also why honoring the progress in both society and the game is so important. We should not be allowed to forget what came before. As they say, those who forget the past are doomed to repeat it. The game of baseball has come too far to allow that and so has the country that calls it the national pastime.

I just don’t find myself in agreement with Bud Selig very often, but the addition of the Civil Rights Game to the baseball schedule has to be applauded. The game was introduced as the unofficial end of spring training game in 2007 played at AutoZone Park in Memphis, TN. In addition to the game, MLB holds an awards luncheon on the day of the game where they award their Beacon Awards recognizing those that were pioneers in the civil rights movement. The game was again played an an exhibition in Memphis following the 2008 season, but starting in 2009, it was moved to the regular season.

After the 2009 and 2010 games were held in Cincinnati, MLB announced that the game was moving to Atlanta for the 2011 and 2012 seasons. It was a spectacular weekend in Atlanta. On the Saturday before the civil rights game, the team honored as many living Negro League legends as they could find and get to the stadium. At the game that evening, the Braves wore the uniform of the Atlanta Black Crackers and the Phillies wore the uniform of the Philadelphia Stars, both former Negro League teams. The day of the game itself, the Phillies and the Braves wore their 1974 throwback uniforms. That was the year that Hank Aaron broke Babe Ruth’s home run record.

At a luncheon yesterday afternoon, MLB awarded their Beacon Awards to Rep. John Lewis, one of the few politicians capable of making you proud to be a human being, to Earth, Wind and Fire, and to all-time Dodger great Don Newcombe. Newcombe is the first, and so far, the only player to have won the Rookie of the Year, the MVP and the Cy Young Award. Newcombe has spent recent years helping former players beat their addictions to drugs and alcohol only adding to his legacy. Lewis and Newcombe are men truly fit to be considered heroes.

Many believe that the so-called modern age of card collecting began with the release of the iconic 1952 Topps set, but it was, in reality, the 1948 Bowman set that began the golden age. It was a small set of only 48 cards, but it led to the creation of the 1949 set, in which, baseball cards would serve as documentation for the integration of major league baseball. (Thanks to Talking Chop user dale murphy for cooperstown for reminding me of this with a comment last week.) The 1949 set would feature the first mass produced baseball cards of Jackie Robinson, Roy Campanella, Larry Doby and the great Satchel Page. As more and more black players were allowed into the game, the hobby documented their arrival.

That’s the thing, the game as we know it today, pretty much began when Jackie Robinson stepped onto the diamond at Ebbets Field for the first time. The integrated game was different than all that came before it, even acknowledging that true integration wouldn’t take place for years and years. Allowing black players to play alongside white players changed the game immeasurably. It is a remarkable coincidence that rise of modern card collecting began with the same period. Robinson had to wait a year for his first card, but Bowman showed up the debut of the great Willie Mays in 1951 and Topps gave us our first Hank Aaron in 1954. As Braves fans, we saw Sam Jethroe in each of the Bowman sets from 1950 to 1953. Topps would later bring us the first cards of the Wes Covington.

I’ve long argued here that the most compelling aspect of collecting baseball cards, especially the main set released each year, is that the cards serve as a sort of history of the game. Nowhere is that more true then in those sets of the late 1940s through the 1950s. As MLB took those tentative first steps towards integration, Bowman and Topps were there to document every step of the way. Those early sets remain an invaluable window into this important age. This is why the hobby is as vital and as important as the game it celebrates.