Share All sharing options for: Open Thread 8/17: Dodgers at Braves 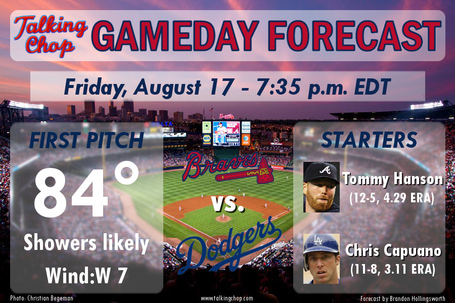 First game of the series is set to start at 7:35 PM ET. Braves lineup:

Chris Capuano has not allowed a run in his last 12.0 innings dating to August 6 and has won his last three starts against Atlanta with his 2.64 career ERA (18 ER/61.1 IP) vs. the Braves ranking as the 10th lowest among active pitchers (min. five starts). The Dodgers rank fourth in the Majors with a 3.38 team ERA and have limited opponents to a .237 batting average, the third-lowest mark in the big leagues.