Don't Just Be A Bullpen, Be A BROpen

Share All sharing options for: Don't Just Be A Bullpen, Be A BROpen

It's #FollowFriday around the Twitterverse, and to celebrate we're going to start running some posts on Fridays about ballplayers you might like to follow in the Atlanta Braves system. Of course, today we're not going to start off with a ballplayer, but a group of ballplayers, bullpenners actually.

The Danville Braves are one of the first stops on the organizational ladder for many minor leaguers drafted by Atlanta. Jason Heyward started there the year he was drafted. Andrelton Simmons convinced the Braves he could play shortstop with an impressive performance at Danville in his first year. Kris Medlen and Craig Kimbrel both looked unhittable in their first year in the Braves system while members of the Danville bullpen.

Now that Danville Bullpen has its very own Twitter account, @DBravesBROpen. Bullpenners are always an eclectic bunch, and this takes that to a new and exciting level. 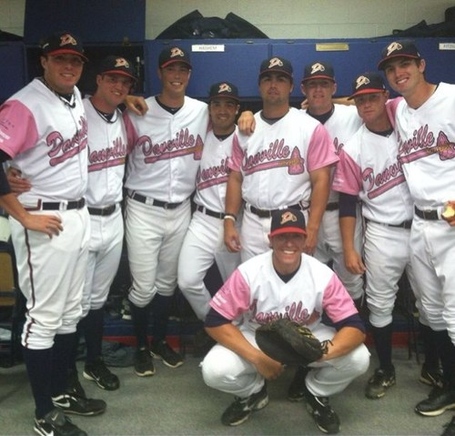 I'm not quite sure who all the folks in the picture above are, but the Danville Braves bullpen consists of Clint Wright (@Clint_Wright51), Jeremy Fitzgerald (@Jwfitz4), Bryam Garcia (@BGarc44), Shae Simmons (@shae_simmons), and Zachary Jadofsky (@Jadofsky), as well as a few others who don't have the Twitta. It's fun to follow these guys and ride along with them as they toil through the Appy League and up the minor league ladder. I expect big things out of them, and I expect big things out of the @DBravesBROpen.

Remember that you can always find an up-to-date list of all Braves players, Major League and minor league, on the right sidebar of the main page of Talking Chop.