The best cards to own for the ten top Braves prospects.

Share All sharing options for: Collecting the Braves Top 25 Prospects (#10 through #1)

This week I complete my look at recommended cards to collect of the Braves Top 25 Minor League Prospects. Last week, I looked at prospects twenty-five though eleven. Here’s a look at the top ten prospects and their best national release cards. (Unfortunately, a few prospects still haven’t had a national card issued. In the top ten, this includes Jose Peraza (#6) and Mauricio Cabrera (#5). Hopefully Topps will take notice of them in 2013.) 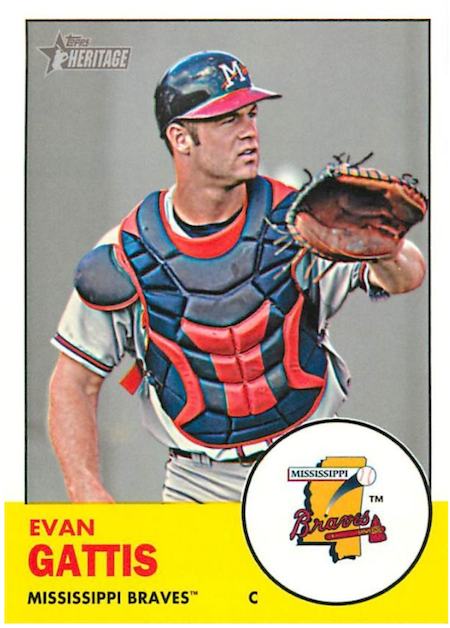 It would be an understatement to say that whenever Evan makes the Atlanta Braves roster, he will immediately be a fan favorite. His story is simply amazing and after you read it, you’ll know just how amazing it is that he’s making the Braves top prospect lists. Now, when his story started kicking up a small storm in the press last spring, you’d think Topps would have noticed and said, “Wow, we have to get this kid to sign for Bowman this year.” Sorry, nope, did not happen. If you want an Evan Gattis card, you can either look for a minor league set or you can pick up his 2012 Topps Minor League Heritage card. 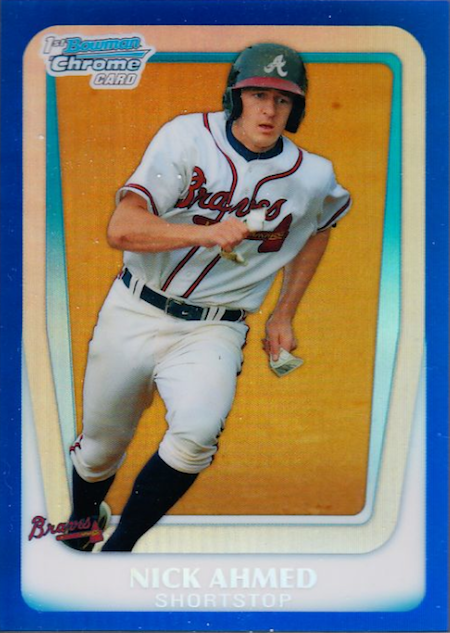 If you’ve been following the off-season rumors, you may have seen Ahmed’s name mentioned from time to time as a potential trade piece. In 2011, he captured the attention of Topps and was included in Bowman Draft. Unfortunately, Topps chose not to include him in any of their prospect or minor league releases for this season. He still doesn’t have an autograph card, but his 2011 Bowman Draft card is still nice and can be had for just a buck or two. The blue parallel shown will cost you near twenty. 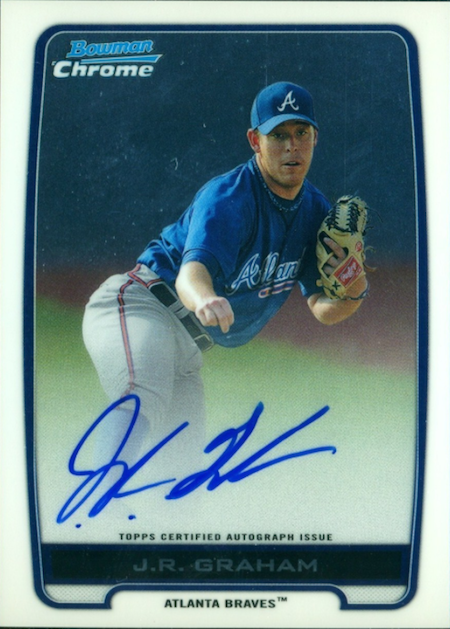 The hard throwing right hander from Santa Clara University made his Topps debut this year appearing in Topps Minor League Heritage, Bowman and Bowman Chrome. In Bowman Chrome, he received his first autograph and if Graham realizes his potential, it’s an amazing value at just eight dollars. 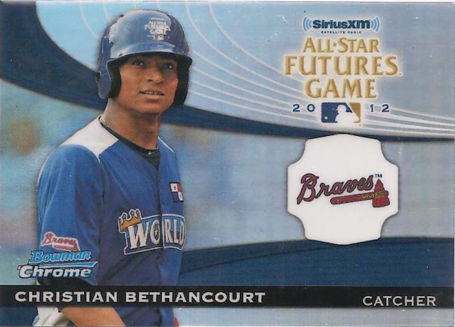 The Braves catching prospect has been featured on numerous cards from Topps, but they still haven’t had him sign anything. Still, he has a handful of great cards. His 2012 Topps Pro Debut base card is hard to resist thanks to the awesome Lynchburg Hillcats uniform. If you only get one card of Bethancourt though, I’d recommend his 2012 Bowman Chrome All Star Futures Game relic. It’s a great looking card and you can find it for just a buck or two. (Do not mistake the relic, a Braves logo on fabric, as game used though.) 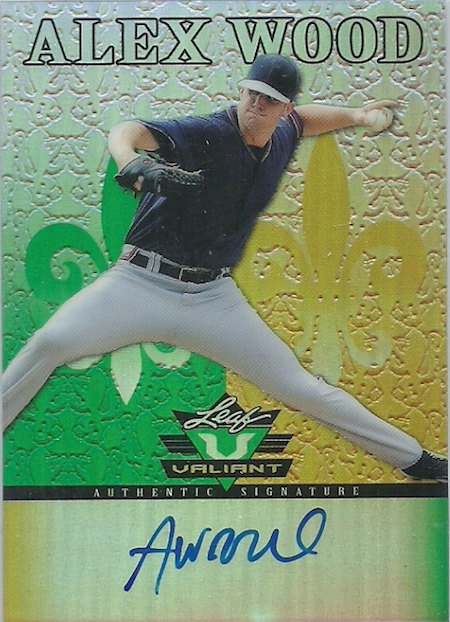 Alex Wood is not a player who has appeared on Topps radar yet. He has, however, been featured on a few non-licensed autograph cards from Leaf. His 2012 Leaf Valiant Draft auto card is fiercely ugly. The shiny green and gold background is distracting. The photograph of the Braves southpaw is fine, except they’ve airbrushed any hint of a logo off his uniform. I don’t recommend this card, even though you should be able to pick one up for five dollars. Still, until Topps decides otherwise, it’s the only Alex Wood national baseball card you’re going to find. 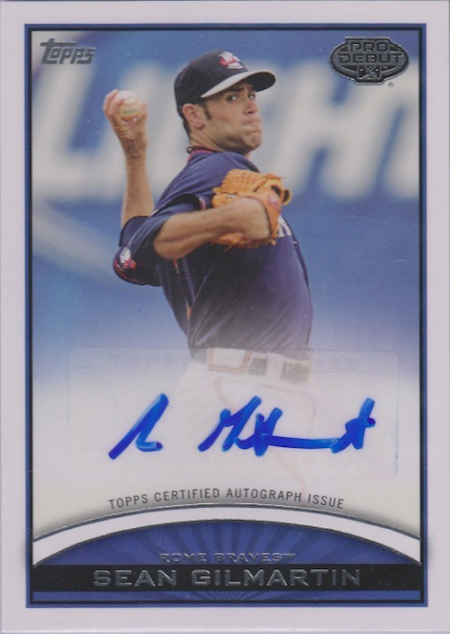 Topps has been putting out cards of the former Florida State University standout even before he signed with the Braves after the 2011 draft thanks to his involvement with Team USA. His first autographs as a Braves player started showing up in late 2011. He still doesn’t have a Bowman Chrome auto, but one of his autos from 2012 stand out. The 2012 Topps Pro Debut is a beautiful card and even though there aren’t a ton of these autograph cards floating around, you can still pick one up for around five dollars. 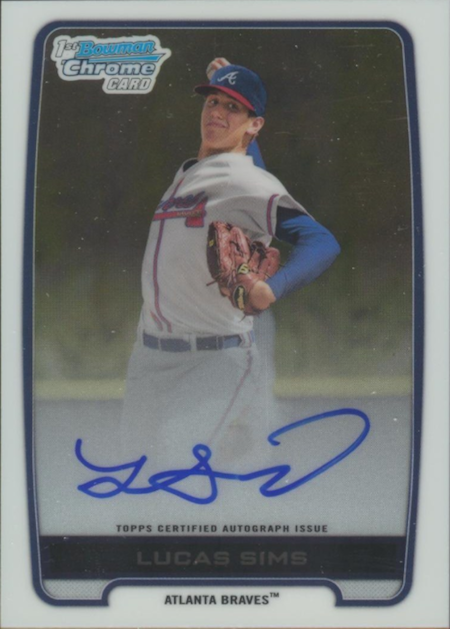 Lucas Sims may have just been drafted out of Snellville’s Brookwood High School this past June, but he found himself in a Bowman set two years ago thanks to his involvement with Team USA. He even has a Team USA signed card. While those cards would make nice pickups, I’d recommend going with the card that was just released. I’ve said it over and over again, the top card you can get for any prospect is his first signed Bowman card and thanks to 2012 Bowman Draft, Sims has his first Bowman card as a professional baseball player. You should own it. (Strangely enough, both the new card and the 2010 Team USA card include the 1st Bowman Card designation.) 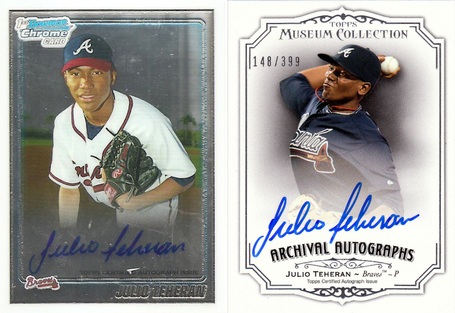 At some point this past season, it became all the fashion to dump on this kid. At least once a day on Twitter you can find someone calling him a failed prospect who should be dealt immediately. He’s 22 years old and he’s already a failed prospect? I don’t buy it. 2012 was not a good year for him, but I’m not ready to give up yet. I see a little cockiness in the kid, and I like that. I think he has something to prove and I think he’ll do it. I’d love to see the Braves give him the same chance they gave Mike Minor this past season. They could run him out there every fifth start and let him work through his struggles. If it works, the Braves could find themselves with an ace.

One thing is certain, Topps got onboard the Julio Teheran train in a big way. His first Bowman cards were released in 2009 and his first signature was in 2010. His 2010 Bowman Chrome auto is the first Teheran card you should pick up. I can’t tell you what you should expect to pay though. You can find the card on eBay for as little as fifteen dollars and as high as sixty. The closer to twenty you pay for the card, the better. With Topps fully onboard the Teheran train, you can also find around a dozen different Teheran autos now, and many of them can be found for under ten dollars. One of my favorites is his 2012 Topps Museum Collection auto. It’s a gorgeous hand signed card and you can find them for around seven dollars on eBay.