Share All sharing options for: What Can Braves Fans Glean From The Winter League Performances Of Juan Francisco And Evan Gattis

I've always heard that one should read very little into Winter League stats. The competition can vary greatly from Major League caliber to low minor league caliber, so an observer just looking at stats has no idea if the player is crushing the Big League guys or the the young kids (or the retired Latino veterans who come back and play for their hometown teams).

But even with all those warnings I watch Winter League stats like a hawk. It's probably because as a baseball fan that's the only baseball being played this time of year, and so it's the only thing feeding my need for baseball. And this winter there are a lot of big-time up-and-coming Braves players toiling away in the Caribbean.

The biggest splash has likely been made by Evan Gattis, who apparently got the name Oso Blanco, or White Bear, from his Venezuelan League teammates. He started out on fire, cooled off some, and has settled into a good rhythm. In 42 games played he has 9 home runs, a .278 batting average, a decent .338 on-base percentage, and has controlled his strikeouts with just 25.

Why should we care about Gattis and his performance? Because until the Braves get a left fielder, Gattis might be a serious candidate for at least some starts in left. As far as power hitting prospects in the Braves system go, right now, he's it. And if his Winter League stats are indication, he might be ready.

The other Winter League surprise is third baseman Juan Francisco. He's playing in the Dominican, and like Gattis, is putting up impressive power numbers. In 29 games Juan has belted 7 home runs and has a .315 batting average, though he has struck out 31 times. He's even hitting left-handers well, though it's a small sample size (another problem with Winter League stats).

Between Francisco and Gattis the Braves could form a potentially potent lefty-righty platoon, that would be made possible by Martin Prado shuffling from left field -- when Francisco plays third -- to third base -- when Gattis plays left. If one of those players emerged as more of an everyday player, then Fredi Gonzalez could go with the "hot hand."

While that may not be an ideal scenario for the Braves, or fans hopeful for a big-time everyday left fielder, that scenario would allow the Braves to develop two players with significant power potential -- and keep in mind, they would likely be hitting in the eighth spot in the lineup.

One hope that Juan Francisco can become more of an everyday player is his renewed physical conditioning. Juan will always be a bigger guy -- he has thick and powerful legs -- but he doesn't have to be a player with a gut and man-tits (see picture above). One of the big criticisms of Juan last year had to do with his weight, and how fans and pundits perceived that it affected his agility at third base and his swing in the batters box.

The following is a picture taken in the Dominican a few days ago, showing a somewhat slimmer Francisco (along with Fredi Gonzalez and catching prospect Christian Bethancourt): 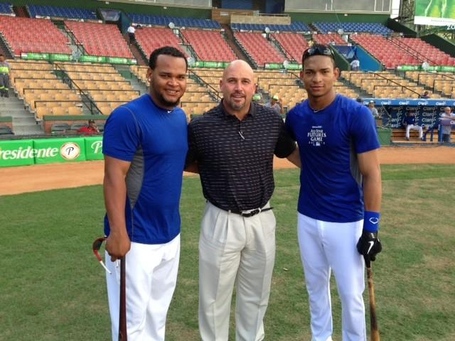 He probably could stand to lose some more weight, but as far as the process of losing weight over the course of the off-season is going, he should be well on his way to being much trimmer when spring training begins in just over two months from now. That should help to silence some of the critics of his weight, but it will also help us see him for what he really is -- of that we'll find out.

Of course, weight on a player is not always a detriment. Pablo Sandoval on the Giants is a guy to point to as being successful while carrying excess weight -- and he is actually only a year older than Juan Francisco.

However the whole debate about playing weight turns out there is promise in the Winter League performance of Francisco. And promise in the performance of Evan Gattis. Both players are 26 years old, and both have taken their own detours on the path to becoming everyday Major Leaguers. This season should show us what the Braves have in these players, and whether or not they can be useful Major League players.

I'll take a look at some of the promising Winter League pitching performances tomorrow.