Braves Graph of the Week: How Alex Gonzalez Works the Count

Share All sharing options for: Braves Graph of the Week: How Alex Gonzalez Works the Count

As a follow-up to last week's graph about Jason Heyward, I bring you this lovely contrast: a similar graph for Alex Gonzalez (2010 season only). If you haven't seen the graph from last week, please go look at it first and read the explanation if needed.

The brief explanation of the top graphs (the heat maps) is that a larger region means Alex put more balls in play on that count, and redder means he slugged better on those balls in play (bluer is worse). 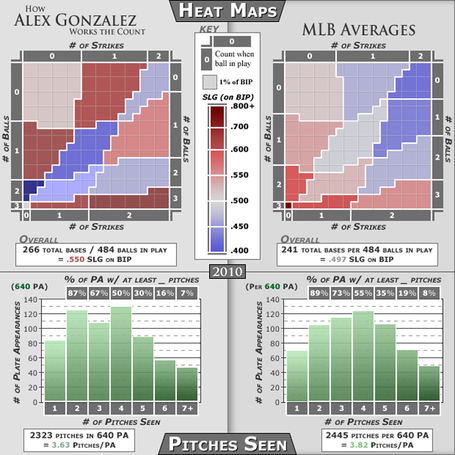 Click to embiggen further, if you desire. A brief run-down of what this graph says about Alex after the jump.

One of the great things about baseball is that when you do research, sometimes your assumptions are confirmed and sometimes you are surprised by what you find. I got a little of both making this graph. First off, the expected:

Now, a couple things that surprised me: