Jair Jurrjens was great last night. Tommy Hanson might have been even better this afternoon.

Hanson dominated the Padres and didn't allow them to score a single run. He struck out 10 batters and allowed just four hits and one walk. The only real threat the Padres could mount against Hanson was in the 7th inning, but Hanson struck out Rob Johnson with runners on 2nd and 3rd to end the threat. Cory Gearrin looked great once again in the 8th inning and Craig Kimbrel closed things out in the 9th.

Mat Latos made the start for San Diego and he actually pitched pretty well. Unfortunately for him, his defense let him down. He gave up six runs (one earned) in five innings and struck out five Braves. Cory Luebke, Luke Gregerson, and Evan Scribner work the final four innings for San Diego.

For the fourth game in a row, the Braves scored in the first inning. Martin Prado doubled to lead off, Jason Heyward moved him over to third, and Chipper Jones drove him in with a weak grounder to the shortstop.

The Braves scored once again in the 2nd inning. Freddie Freeman doubled to start the inning, and after an Alex Gonzalez strikeout, Nate McLouth singled and then moved into 2nd on a poor throw. Tommy Hanson struck out to bring Martin Prado up with two outs and two runners in scoring position. He hit a ball down the 1st base line which should have been stopped, but Brad Hawpe made an awful play on the ball and it rolled down the line, allowing two runs to score. Jason Heyward singled to put runners on the corners, and Chipper Jones broke the game wide open with a 2-run triple to center field. Brian McCann added on with a double to give the Braves a 6-0 lead after two innings.

The triple was his first since June 7th, 2009, which was Tommy Hanson's Major League debut.

With a large lead in-hand, Tommy Hanson went to work on the Padres lineup. Despite leaving his fastball up in the zone throughout most of the afternoon, the San Diego hitters could not make solid contact. His slider was breaking off the plate as usual, and his 12-6 curveball was freezing batters all afternoon long. He even broke out the changeup a could of times.

The Braves scored once more in the 9th inning on a Jason Heyward RBI-single, and Craig Kimbrel closed out the game.

With the win, the Braves are back to .500 and finish their west coast road trip with a record of 6-4. Not too shabby.

More after the jump...

Brad Hawpe - If he makes that play in the 2nd inning on Prado's ground ball, who knows how the game turns out. The Braves would have only been up by one run instead of six.

The Braves will have a much needed off-day tomorrow, and will then welcome Albert Pujols and the Cardinals to Turner Field. First pitch is at 7:35 on Friday night. 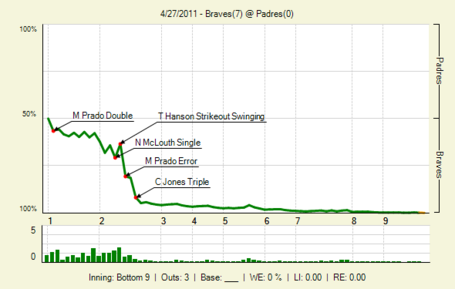