Chipper Jones succinctly stated after tearing his ACL in 2010 that he would play again in 2011, but many Braves fans were understandably worried about how his scarred-up knees would hold up at 39 years old. However, not only did he play in 126 games, he put together one of the more productive seasons of anyone on the team.

One can safely assume Chipper's days of 30 HR/100 RBI are behind him, but he was still the productive hitter everyone knows him to be. He had the highest slugging percentage on the team (.470) and was third among all third basemen with a 3.02 WPA, also the highest of all Braves hitters. His .345 wOBA was seventh among third basemen. 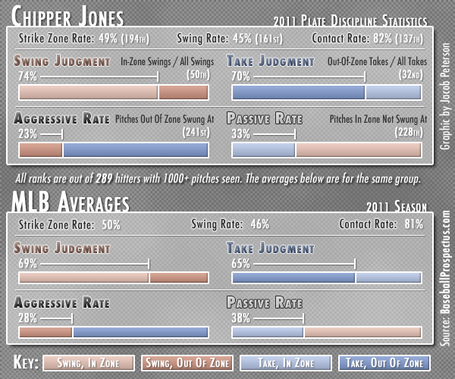 For all of Chipper's knee troubles, he was quite durable. He started all but 12 of his 126 games despite a meniscus tear in his right knee. He tried playing through it, but was ultimately placed on the DL July 9 in order to undergo arthroscopic surgery; despite this, he was awarded his seventh All-Star selection. He returned July 25, missing 12 games. Four of his first five games following the DL he entered as a pinch-hitter. Pinch-hitting wasn't Chipper's strong suit during the season, going hitless in 10 at-bats. However, in his 49 games post-break, he hit .303 with an .895 OPS while hitting 10 of his 18 home runs.

When the offense began struggling, Fredi Gonzalez juggled the lineup, moving Chipper as high as second to as low as sixth in the lineup. Results were mixed, but Chipper succeeded the most out of the fifth spot in the order, a place he hadn't hit since 2005: in 12 games there, he hit .404 with three home runs and a 1.102 OPS.

Despite Chipper's success at the plate, his defense, specifically his range, suffered as a result of his ailing knees. He could still make the tough plays on slow ground balls, but his Range Factor at third base was his lowest since 2001 and his defensive WAR was -0.3, and let's not even discuss losing a ball "in the lights".

2011 was a year of milestones for Chipper. Without a doubt a Hall-of-Famer, he added to his Cooperstown resume with some pretty impressive achievements:

In Conclusion
Chipper stated in August that he would definitely return in 2012, postponing retirement for at least one more year. He has nothing more to prove as a hitter, but provides invaluable advice to young hitters like Freeman and Heyward. His glove may not be worth a whole lot, but he is an indispensable asset to the Braves. If 2012 is indeed his final season, he deserves to go out on top.