Share All sharing options for: Interview With Braves Outfield Prospects Mycal Jones And Cory Harrilchak From The Panamanian Winter League 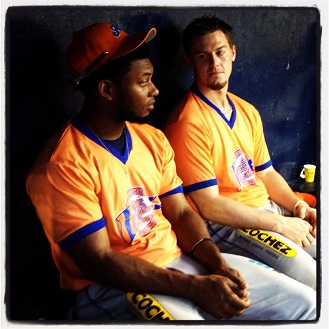 For those of you who didn't follow along on Twitter, I spent the week before Thanksgiving in the country of Panama, traveling around, cruising the Canal, and attempting to see some Panamanian Winter League baseball. I say "attempting," because both of the games I was going to see got rained out -- it rains a lot down there; tropics and all. That said, I don't know why more people don't go to Panama. It's three and half hours from Atlanta, Delta flies direct, they use the US dollar as their currency, it's in the Eastern time zone, a lot of people speak English, and there's plenty to do.

I was curious to see the Panama Canal, and I've really been wanting to see some winter league baseball. I looked hard at Puerto Rico, but they didn't have their schedule posted until a day before the season started, and once I was able to find the Panamanian Winter League site, it was an easy choice, made easier by the chance to see two players from the Braves take the field.

I emailed Mycal Jones before I went down there and arranged to interview both he and Cory Harrilchak before one of the games. I decided to do a couple of firsts for Talking Chop:  interviewing them both together, and doing a video interview. I don't have any fancy equipment, just a Flip video cam and little mini tripod (that Cory was just AMAZED by), so this is as it should be, a blog-style production -- not quite professional, but awesome just the way it is.

The interview came out great, though first because of rain, and second because the battery ran out, the interview got chopped into three parts. I'll present these over the next three days. So now, without any further blathering, here is Part 1 of my interview with Braves outfield prospects Mycal Jones and Cory Harrilchak from the Panamanian Winter League at Estadio Rod Carew in Panama City.