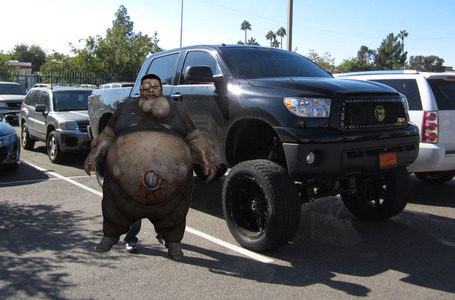 Hi everyone. I hope you all had a Happy Thanksgiving. Mine was swell. As always, ate like a pig.

Look, I'll be honest with you guys. I've been up since 3:00 a.m. since I'm one of those guys that has been known to do some of that crazy Black Friday shopping. But I got everything I aimed to get, with minimal standing out in the cold since I'm not looking for a big television, laptop, Xbox or a three-dish Crock Pot. However, as a result, I'm dog tired, and I admit I procrastinated a little bit in getting some weekend links in order. So the links are a bit scant this week, and maybe obvious that I'm a little on the sleep-deprived as well as on too much caffeine.

So have safe holiday weekends, and enjoy this picture of me standing next to Bryce Harper's truck that I saw out in Scottsdale during the AFL. Welcome back to the basement.

Marlins trade catcher John Baker to San Diego Padres for Wade LeBlanc - Fish Stripes
The Marlins could use some SP depth with the questionable health of Josh Johnson and Ricky Nolasco, and with John Baker on the cusp of being non-tendered anyway, the Fish manage to get something out of him before it got to that point, by sending him to the San Diego Padres, for lefty-starter Wade LeBlanc, straight up. He's no world beater by any means, but he's an arm that's capable of not completely embarrassing himself while the rotation shapes up.

John Buck likes the idea of expanded playoffs - Palm Beach Post
The incumbent catcher of the Marlins, John Buck, who has been his share of .500+ non-contenders throughout his career, likes the idea of a one-game playoff to include another team to have a shot at the World Series. Personally, put me in the side that disagrees; if baseball seasons are supposed to be 162 games, why should one game dictate the outcome of the season for those who procrastinated being good until the very end?

Is the growing national attention a good or a bad thing? - Marlin Maniac
Whenever a question like this arises, my first notion is to always say "no such thing as bad publicity," but I can see the gist of this post. It's good that the Fish are getting some national exposure with their new uniforms, signing Ozzie Guillen, and their new ballpark, but with the good, often comes some bad. Fair weather fans, dickhead fans, media bias, and unwanted criticism, to think of a few for example.

Marlins taking no accountability for parking garages for new park - Sun Sentinel
Surprise of the century.

The five braniest Marlins of all-time - Fish Bytes
You know it's a holiday week when this kind of fluff makes the waves, but with the departure of John Baker, it apparently had to come out.

Adam Loewen signs minor league deal with Mets - Amazin' Avenue
The former Orioles pitching prospect has landed himself with the Mets going into 2011 - as an outfielder. After forgetting how to pitch in Baltimore, the O's moved him to the outfield, hoping he would do his best impersonation of Roy Hobbs or at least Rick Ankiel. Last year, he clubbed a .306/.377/.508 slash line with 17 HRs for Toronto's AAA-Las Vegas. The expectations won't be high, but there's little risk with possibility of some reward here.

Daniel Murphy is the only choice for 2B in 2012 - Mets 360
I'll concede that his bat is an asset that should be inserted into the lineup on a regular basis, but the fact of the matter is that his footwork is abysmal, whether he is at first base or second base. I agree that regular work might improve him, but until/if he gets better, it could be disastrous to have him at second every day.

New draft rules could potentially make Mets have to change plans - NY Post
With the new CBA in place that dictates restrictions on how much teams can pay draft picks and international free agents, the Mets, who went over the numbers set as the new precedent last year, could run into some potential snags, in their efforts to rebuild throught the draft and international free agency.

Happy Thanksgiving from Lenny Dykstra who has found acceptance - NY Daily News
Nothing says a warm and inviting Thanksgiving than an interview with Lenny Dykstra in rehabilitation with an ankle brace, talking about how his life as a partier is what led to him making a whole lot of ill-advised decisions that led to his bankruptcy and imprisonment.

So let's find a real Happy Thanksgiving greeting, from none other than R.A. Dickey - Amazin' Avenue
Is there nothing this guy can't do? Reviving his career with knuckleballs, bicycling to work during Spring Training, and now raising awareness for illegal child slavery in India? What a guy.

An exercise in futility from - The Apple
Two images, one is real, one is fake. Which one is the real Mets team store?

Wilson Ramos back playing ball in Venezuela - Nationals Journal
Less than two weeks removed from being kidnapped and held hostage, Wilson Ramos is back to where he's most comfortable - on the baseball field. With extra security in place, and a packed house, Ramos went 0-5, but that was hardly the point.

Nats ticket people think forcing New Yorkers to buy five tickets for one game will deter them - The Bog
I was in Baltimore for a O's/Yankees game a few years back, and I was having a conversation with a New Yorker at Pickle's, in town to see the Yanks. He explained to me that it's cheaper for his family of eight to drive down to Maryland, buy eight tickets, get two hotel rooms, the cost of gas, food, and concessions, to see the Yankees in Baltimore, than it is to see the Yankees at Yankee Stadium, right there in New York, not to mention, more fun. If the Nationals think that forcing New Yorkers to buy ticket packages that include games versus the Reds, O's, Phillies and Rays to get one game versus the Yankees in Washington D.C., will deter them, I'm pretty sure they're going to be disappointed. Yankees fans always travel well, no matter where, and what the circumstances are.

It is looking more and more like the Phillies will either have to sign Rollins, make an unlikely run at Jose Reyes, or resign themselves to playing 2012 with a huge offensive drop off at short stop.

It'll never happen, but it would be funny to see Ryan Madson pull a Rafael Soriano on the Phillies for the crap they pulled prior to getting Jonathan Papelbon, and give the org some fits in the process.

But not to Roy Oswalt - Washington Post
Since there is obvious fear that Oswalt might very well accept, and put the Phillies on the hook for a pretty high salary, the Phillies lose out on a potential draft pick by not offering arbitration to Roy Oswalt. Who is being pursued by teams like the Nationals, or could very well retire due to the reported back troubles.

Phillies acquire Ty Wigginton for PTBNL - Phillies Zone
I'm trying to formulate a joke about how the NL East now has TWO All-Stars in Omar Infante and Ty Wigginton and how they play every position and question the legitimacy of their All-Star nods, but I'm really tired and can't think of one. 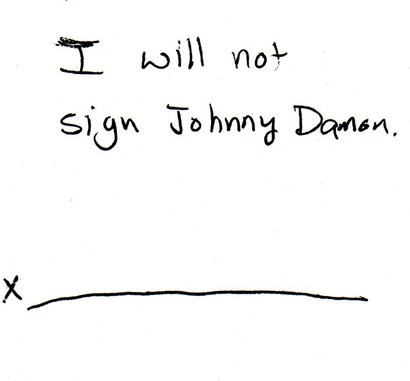 It's not even 2012 yet, and the Citizens Bank Park martyrdom flares up again - The Good Phight
Cue requisite jokes about Bobby Cox, Chipper Jones and John Smoltz saying stuff about CBP's hitter-friendly tendencies and then nasty comments about them.