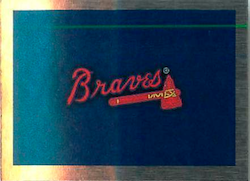 There are wonders to be had at your local Target. For a mere dollar, you can buy the type of joy that can only be found in foil packs. Yes, your one dollar will get you eight 2011 Topps stickers, and trust me, there’s no better, more exciting purchase you can make in the realm of card collecting right now.

Over the years, Topps has periodically put out sticker sets, but they haven’t put out a set of baseball stickers since 1991. In the past, Topps didn’t always get the stickers right. They would often place two stickers on one card, and the back was a card for a different player. This wasn’t a big deal if you put the stickers in the album that was also on sale. If, however, you tried to collect the stickers like cards, this was a pain in the ass and made it hard to know whether you had a complete set or not. (On the other hand, I’d argue that anyone who wants to collect stickers but not put them in an album is a weirdo. That’s the whole point!)

This year, Topps got the design right. The stickers are not only great looking, but they are printed as one sticker per card, and the backs don’t include player information. If you want to collect these like cards (you weirdo), then you can do so easily. Every team is represented with a representative starting nine and there is a set of nine foil stickers featuring many of the legends of the game. There are also stickers featuring each of the teams logos.

This is the best value in card collecting and you should jump aboard the train now. (Even better news: Topps has already announced that the stickers will return next year.) Let’s take a look at the Braves starting nine. 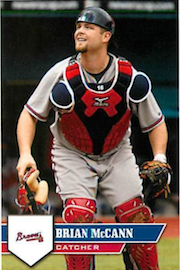 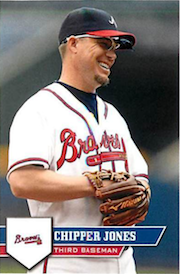 Three men have defined the Braves since their arrival in Atlanta. In the early days, it was, obviously, Hank Aaron. In the 80s, Dale Murphy was the face of the franchise. For the Bobby Cox years, that man is Chipper Jones. I still find it hard to believe that Chipper Jones is nearing the end of his playing career. I have a hard time accepting that there are players younger than me who are contemplating retirement, let alone one of the Braves all time greats.

Brian McCann, on the other hand, is the Braves best hitter and was still, despite a hard slump following his injury, the best hitting catcher in baseball. Before he was hurt, McCann was one of the best players in the National League, and was going to receive serious attention in the race for MVP. As good as he is though, I doubt he will ever become the face of the franchise in the same manner as Aaron, Murphy and Chipper. Catchers simply don’t have the shelf life. I think it is far more likely that Freeman or Heyward will be the next face of the franchise.

This is a great shot of Chipper having fun and clowning around. I love Topps move to include so many great, close up, action shots in most of their products, but shots like this one humanize a player and increase the enjoyment of a card. As for the McCann shot, I can’t quite figure it out. He looks like he’s smiling. Perhaps, he just watched Alex Gonzalez make a great play in the field? It certainly wouldn’t be the proper reaction if he had just watched Scott Proctor get bitten by a gopher. No one in a Braves uniform would smile at that. 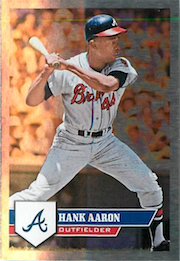 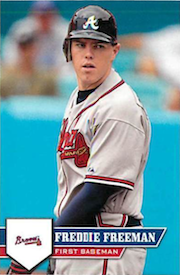 The return of Hank Aaron to Topps in 2011 remains exciting into the late releases of the year. Topps has made an effort to get him into every product, and they’ve done it well. This sticker is certainly fantastic. Typically, you either see Aaron pictured as a young man with the Milwaukee Braves or you see him pictured with Atlanta from the period around the time he hit number 715.

For the Hammer, Topps went with an action shot from his early days in Atlanta. It’s not hard to picture Aaron using those amazing wrists to whip the bat around and deposit yet another baseball in the bullpen over the left field fence at Fulton County Stadium.

Young phenom Freddie Freeman isn’t captured at his best though. He looks annoyed. I suspect that they captured him walking back to the dugout after he struck out. Freeman has appeared all over all of the Topps products this year. He has had numerous cards that are truly great. This isn’t one of them. 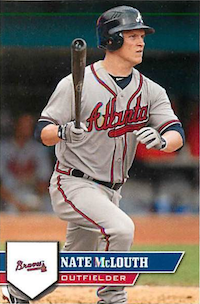 I always tell people that I was pulling hard for Nate McLouth, but on the face of it, that’s a rather stupid comment. Of course I was pulling for McLouth. He played for the Braves and I’m a Braves fan. Still, I wanted him to do well. I don’t think any of us thought he was dogging it. He clearly was putting the work in. I thought it was just a matter of time before he put it together. Remember when he hit that game winning home run and his teammates left the dugout for the clubhouse before he had finished rounding the bases? Remember his awesome reaction? That scene of him celebrating in the hallway to the clubhouse with his teammates will be a lasting memory. It was not the spark that would return McLouth to his All Star form though. That spark did not and will not occur in Atlanta.

I know why McLouth appears in this set, but he sticks out like a sore thumb. I think anyone who follows the Braves would have rather seen Michael Bourn or Jordan Schafer in this spot for the sticker set. Well, Bourn is in the set as the Astros CF. This set was clearly put together early in the season, and McLouth was the OF. I guess he does belong here. If nothing else, we’ll have the memory of that game winning home run and the celebration.

He’s a free agent now and I have no idea where he’ll end up, but I hope he figures it out. I’ll still pull for Nate McLouth. 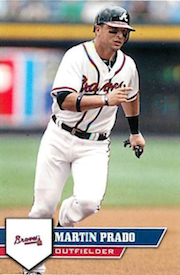 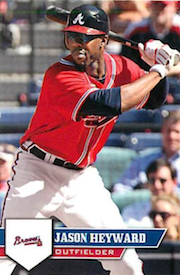 Here we have two of my favorite players, and two of the guys I expected to lead the Braves in 2011. It certainly didn’t work out that way. No matter how much time he put in, Prado never seemed to find his swing. Heyward was more of an enigma. He was, more or less, called out in the press by Chipper during his time on the disabled list. Every single time it looked like J-Hey was about to get going, he didn’t. He would, again and again, weakly ground to second, often resulting in a double play.

I expect both to rebound and have great seasons, but I’m an eternal optimist when it comes to my favorite players. It is possible that Prado may be fated to return as a merely OK hitting utility man and Heyward may never realize his potential. As a fan, I’m hoping the Braves don’t give up on either just yet. If I see Prado wearing another teams uniform next year, I’ll be heartbroken.

One thing is certain; both will look as they appear on their stickers. Prado will look like the guy playing the hardest and Heyward will look big and imposing. I think we all hope their numbers match their appearance on these wonderful stickers. 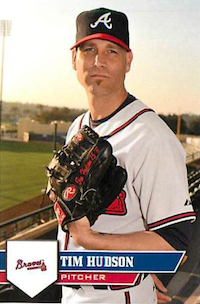 Derek Lowe got another opening day start. Jair Jurrjens and Tommy Hanson cut a wide swatch across the National League the first half of the season. Young kids Brandon Beach, Mike Minor, Randall Delgado and Julio Teheran showed that they can be counted on. Still, when all was said and done, Tim Hudson was, again, the main man on the mound for the Braves.

I’ve been fortunate enough to see Huddy pitch any number of times. The most recent was the final game of this past season. It is a game I don’t want to spend too much time thinking about, even though he pitched well. The memory of him this past season I want to carry with me is that of his home run against the Blue Jays back in June. The smile on his face as he slowly (and I do mean slowly) rounded the bases was infectious. If there was ever a moment where a pitcher’s home run should be given a card, this is the one. Get on it Topps.

This is the only posed photo among the Braves stickers, and while I usually prefer an action shot, this is excellent. A classy photo for a classy guy. 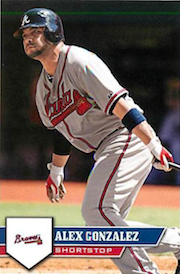 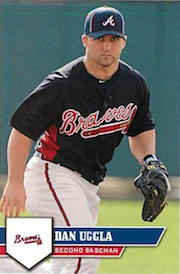 Alex Gonzalez always leaves me feeling like a yoyo. After watching him flail away fruitlessly at the play, I’ll be as down on him as any player on the Braves. Then, he’ll take the field and moments later I’m smiling in amazement at his play at shortstop. Does his defense make up for the lack of offense? I’ll leave that for you to decide.

Looking at these stickers, I’ve come to the conclusion that Topps has a sense of humor. Why else would they have included a shot of Uggla playing the field and Gonzalez swinging the bat?