Share All sharing options for: The Affordable Hank Aaron 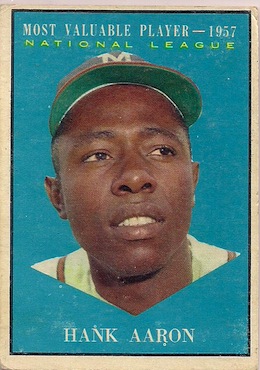 I am of the opinion that every Atlanta Braves fan should own at least one Hank Aaron baseball card. No fan of the Braves who collects cards can consider their collection complete without a Hank Aaron card. Even if you don’t collect cards, your love of the Atlanta Braves should compel you to purchase a Hank Aaron baseball card. If you have even a single friend who respects the history of sport in America, they will be suitably amazed when you show off your Hank Aaron card. 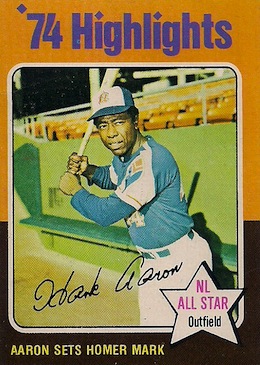 When the 1960s ended, and the 1970s started, the consensus opinion that Willie Mays would break the Babe’s record had faded. His home run numbers dropped in both 68 and 69 and he was clearly nearing the end of his amazing career. Into this void stepped Hank Aaron. Always a prodigious slugger, Aaron would show no signs of slowing down in the early 1970s. You can argue that 1971 was the single greatest season of his career (although he lost the MVP to his good friend Joe Torre). At the end of the 1973 campaign, Aaron was a single home run behind Babe Ruth.

Of course, as every baseball fan knows, Hank Aaron would tie the Babe to open the 1974 season in Cincinnati before claiming the home run title as his own in Atlanta just four days later against Al Downing and the Los Angeles Dodgers. At the end of the 1974 season, the relationship between the Braves and Aaron had soured to the point that they worked out a trade allowing Aaron to end his career in the same city where it had started, Milwaukee. After two short, uneventful years in Milwaukee, Aaron hung up his spikes.

Aaron’s cards from the 70s are more affordable than those from the 60s and 50s simply because they aren’t as old. The 1974 set would open with a six card series celebrating Aaron’s career. The first card is his base card and acknowledges that he is the new all time home run king. The next five cards are a celebration if his career, including images of his previous Topps base cards. Unfortunately, the stats on the back of the 1974 cards are shown through the 1973 season only. If you want a card showing his stats as the all time king, you need a card from the 1975 set. Unfortunately, that set features Hank Aaron in the last card of the set, as a Milwaukee Brewer. Topps does, however, also include another Hank Aaron card as the first card in the set, as a part of the season highlights series, honoring home run 715 and showing Hank Aaron in an Atlanta Braves uniform. You should own this card. 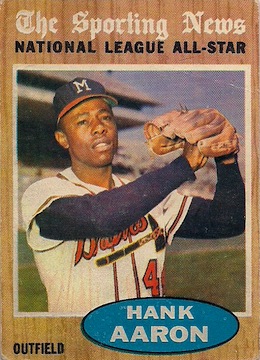 In numerous sets, Topps would include an All Star subset within their main set. While Aaron’s base cards have always commanded a hefty price, many of his All Star cards are priced far more modestly. All Star cards are only priced near or higher than the base card in seasons where the All Star subset appears during a “high number” series released later in a season. (Cards in a late series are, generally speaking, rarer than those cards released early in a season.) Obviously, the plus to this is that it gives you a method of acquiring a very old Hank Aaron card at an affordable price. For instance, his 1962 base card books at 150 dollars. It is a beautiful card and many would love to have it in their collection. However, if you’d like a more affordable option, his 1962 All-Star card, pictured here, books at only 50 dollars, but can often be found on eBay for less than $20.

(3) You should buy a Hank Aaron card picturing other players. 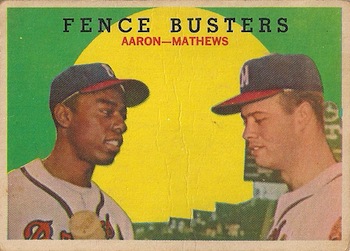 In 1964, Topps released one of my favorite cards ever. The card is entitled “Tops in N.L.” and depicts Hank Aaron and Willie Mays talking before a ball game. On the card, Mays looks to be telling Aaron a joke while he looks off in the distance. This is an iconic card of two of baseball’s greatest superstars and can be often found around 20 dollars on eBay.

Even more iconic is card number 418 from the 1958 Topps set. The card is entitled “World Series Batting Foes” and it depicts Mickey Mantle in his left-handed batting pose and Hank Aaron is his right handed batting pose. Like the 1964 card with Aaron and Mays, this is one of the iconic cards of card collecting. Both Mantle and Aaron would win the MVP awards for their teams in 1957 and faced off in the World Series. Of course, Mickey Mantle is the darling of the hobby and his presence raises this card into the 400 dollars book level with substantial discounts hard to find.

The best deal though, and the card every Braves fan should own, is the 1959 Topps Fence Busters card featuring Aaron with teammate and hall of fame slugger Eddie Mathews. While I don’t think anyone would dispute tagging Hank Aaron as the best hitter in Braves history, I think the argument for Eddie Mathews as the second greatest is almost as strong. The Aaron/Mathews tandem rates even higher than the Mantle/Maris and Mays/McCovey pairings of the age. If you following the eBay auctions closely, you can sometimes win this card for a bid as low as a few dollars. That seems like an absurdly low price for a 1959 baseball card of the Braves two greatest offensive players, but that is to your advantage. You should get this card.

(4) You should buy a Hank Aaron card in lesser condition. 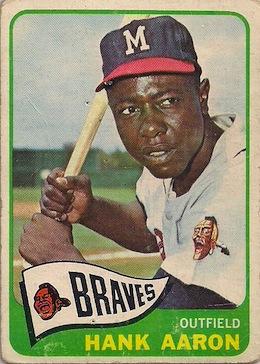 If someone were to give me a 1954 Hank Aaron Topps rookie card in mint condition and I would sell it and purchase the same card in lesser condition and pocket the rest of the money. I am aware that I am somewhat strange for a card collector, but I do not like the look of vintage baseball cards in mint condition. For one thing, the cards just look fake. An old card in great condition resembles a reprint just a little too closely for my tastes.

Yes, purchasing cards in lesser condition is far more feasible for myself, but that isn’t the reason I love lesser condition, older baseball cards. It’s more about my romantic ideal of card collecting. A 1954 Hank Aaron baseball card in great condition was clearly never handled much. The card’s owner clearly didn’t spend his evenings staring at the back of the card. The card wasn’t carried around the neighborhood where it could be showed off to the owner’s friends. It was never placed on the top of a stack of Braves that was held together a little too tightly with a rubber band. The card was never loved. When a buy a vintage card, I need to know that it was loved. I need to know that it was collected.

Of course, if you are in the market for a vintage Hank Aaron card, creases, rounded corners and a little surface wear are your ticket to an otherwise unaffordable card. If anyone tries to shame you for loving a damaged card, and there are those who will, then you can immediately discount their opinion on anything card related. You should go on eBay and search the Hank Aaron baseball card listings with the keywords Poor, Good and VG. This is your ticket to an Aaron card that has been loved and that you will love for as long as you own it.

A Few Other Cards of the Types Above 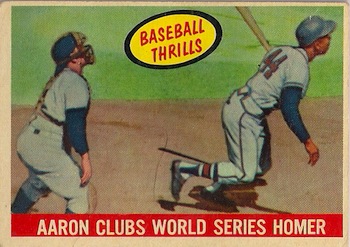 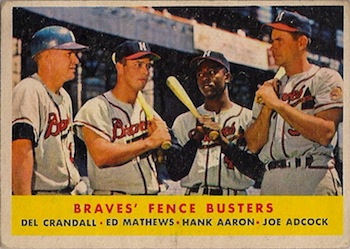 Joe Adcock was a pretty good slugger himself. Another card with rounded corners and deep stains. You can typically find these very, very cheap. 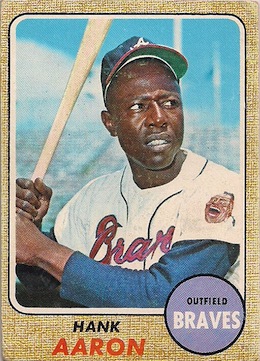 Someone decided the surface of this card should be a little sticky. That's OK. I love it just like this.