Where does one begin with Brian McCann, the best catcher in all of baseball?

Braves fans saw the very best and the very worst of our All-Star catcher in 2011. Before straining his oblique in what was quite possibly the weirdest game we have ever witnessed, McCann was a legitimate MVP candidate. At the time of his injury, which was July 26, Mac was batting .306/.375/.514 with a team-best wOBA of .381. He was hitting for power, getting on base, and was a consistent force in the lineup every night of the week.

The oblique injury kept him out of action for just under three weeks, though in hindsight McCann came back way too soon. After returning to the lineup on August 14, he simply was not the superstar that Braves Country has grown to love.

It was excruciatingly painful to watch him struggle down the stretch the way he did. We have grown to expect so much more from the man affectionally called, "Heap". 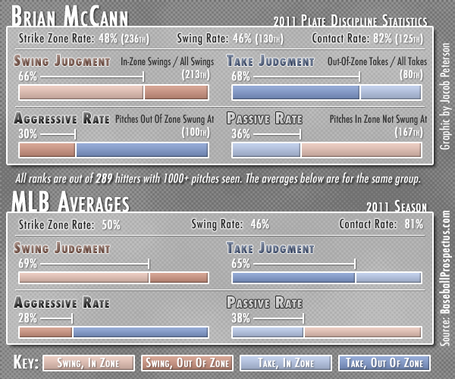 In August and September, McCann hit .178/.296/.352 with a wOBA of .275. Those are Francoeurian numbers. After belting 16 homers in the first four months of the season, he hit just six the rest of the way. Mac struck out more times in September (22) than he did in any other month, and his ability to throw out potential base stealers was nonexistent.

Braves fans will point to many reasons for the epic collapse in September, but the loss of Mac was the tip of the iceberg. The team lost its best player for three weeks, and even once he returned, his impact was not felt on the lineup.

Brian McCann is going to be the catcher in Atlanta for quite some time. It appears that he entered his prime in 2011 and we are going to be treated to another great season from our talented catcher. Assuming he can stay healthy, another run at an MVP award is not out of the question. He truly is a once-in-a-decade-type of talent and we should cherish the days we have No. 16 behind the plate. Mac's on pace for the Hall of Fame, folks.