Alex Gonzalez was absolutely terrible at the plate in 2011. Hey, you know it, I know it, and the rest of the league knew it.

Regardless if one takes a look at his batting average (.241), on-base percentage (.270), slugging percentage (.372), wOBA (.275) or wRC+ (75), Gonzalez's output was abysmal any way you spin it. And while no one realistically expected him to match the career-highs he set with Toronto and Atlanta last season, at least some production out of the veteran would have been nice.

He tied a career high in strikeouts with 126 and drew a walk just 22 times despite recording 593 plate appearances. Among the qualified hitters in baseball, Gonzalez ranked 300th in K/BB ratio. There were 306 eligible players for this 'honor', and only six showed less plate discipline than our shortstop did. That's not good.

To his credit, Gonzalez was experiencing an incredible month of September before succumbing to injury. In 18 games, he hit .367/.385/.633 with three homers and 11 RBIs.

For a veteran mired in a terrible slump, it took a lot of heart and effort to have the final month that Gonzo had. Props to him for carrying the offense for a few weeks before his calf kept him out of the lineup. His work ethic on the field was never questioned; it was simply his production (or a lack thereof) that continually drew the ire of Braves Country. 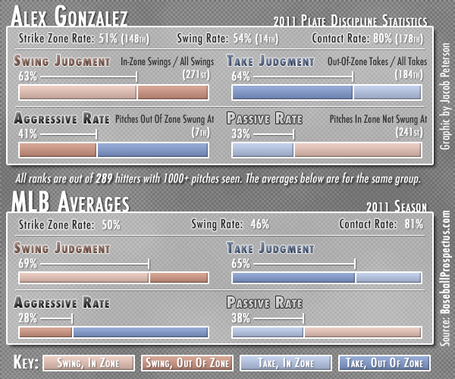 If there was any aspect on Gonzalez's game that benefitted the Braves in 2011, it would be his defense. As a matter of fact, he was among the best in the game at shortstop. While his UZR was down from his career average, his DRS (Defensive Runs Saved) ranked him second among all shortstops with 15 runs saved. And while they do not show the true value of his performance in the field, Gonzalez committed just 12 errors in 1,316 innings of play. Meaningless stat or not, that's pretty damn impressive at one of the most difficult positions to play.

Should he not return next season, his glove will certainly be missed. His bat? Not so much.

There's a chance Gonzalez could come back to Atlanta next season, but no one is quite sure what Frank Wren is thinking at the moment. Should the club decide to re-sign the shortstop, he would come cheap and could serve as a decent bridge player until Tyler Pastornicky (or some other everyday shortstop) takes over the position on a full-time basis.