I was all prepared to run the numbers on the Atlanta Braves Fan Confidence Poll and find a huge drop-off from last week. After all the team's star player, Chipper Jones, is out for the season -- a blow that I was sure would send the fans into a confidence spiral. But that was not the case.

The fan confidence rating dropped a mere one point from 78 percent confidence to 77 percent -- virtually unchanged, and within the margin of error. The poll closed before the Derrek Lee trade news, so that did not buoy the confidence. The Braves have been winning lately, having now won four in a row, so that could have helped the confidence. But I still thought that the Chipper news would be a bigger blow than it seems to have been.

Braves fans are an interesting bunch. Let nothing faze us. 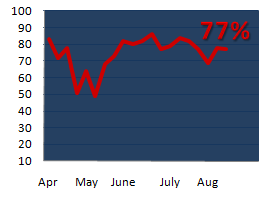